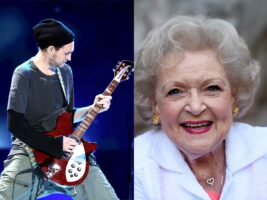 Josh Klinghoffer honours the late Betty White with touching cover of Golden Girls theme song: “There has been a lot of loss lately, a lot of endings”

Former Red Hot Chili Peppers guitarist Josh Klinghoffer has honoured the late Betty White with a touching cover of Thank You For Being A Friend, the Andrew Gold-penned tune which served the theme song of the Golden Girls.

Klinghoffer shared his cover of the song yesterday (3 January) to the Instagram page of Pluralone, his musical solo project, including a statement on loss in the caption.
“There has been a lot of loss lately, a lot of endings,” he wrote. “It’s happening all the time everywhere, but these past few weeks have seen the loss of a few important people in my life. I rarely feel like I have any wisdom to share, but the son of the creator of the show I have included the theme song to said this, and I think it’s just brilliant. He said (something like), ‘We are all experts at being exactly who we were the day before.’
He continued: “As it’s a beginning of sorts, tomorrow, perhaps try and do something differently. Make that call. Start that book. Go and breathe outside. Put an end to that fight. Feel. Try and mend some of the broken things you see around you, inside and out. Live life knowing you don’t have forever as all lives tend toward ending.”

Betty White died of natural causes at the age of 99 on 31 December 2021. In a statement to People, her publicist Jeff Witjas denied rumours that the actress’ death was related to her receiving the COVID-19 booster shot a few days prior: “Betty died peacefully in her sleep at her home. People are saying her death was related to getting a booster shot three days earlier but that is not true. She died of natural causes. Her death should not be politicised — that is not the life she lived.”
The post Josh Klinghoffer honours the late Betty White with touching cover of Golden Girls theme song: “There has been a lot of loss lately, a lot of endings” appeared first on Guitar.com | All Things Guitar.