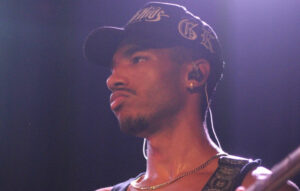 Duckwrth earned his stripes in South Central LA’s storied hip-hop scene, but 33-year-old rapper and songwriter creates soundscapes that don’t easily fit into a conventional mold. Blending bars and beats with R&B and earworm guitar riffs, Duckwrth has amassed over 350 million streams around the world with songs like Super Bounce and Kiss U Right Now, earning him slots on the soundtrack of blockbuster movies Into The Spider-Verse and Space Jam: A New Legacy, and there’s also the small matter of being tagged to support Billie Eilish on her forthcoming tour.

Key to what makes Duckwrth stand out from the crowd is J Hawk, the guitarist who also serves as his musical director, helping to shape his musical vision both in the studio and on stage. Hawk grew up in a musical family and fell in love with the guitar early, he studied music production at college and formed his own music collective. Nowadays he’s responsible for directing Duckwrth’s increasingly multi-media approach to playing live, as evidenced by the display we see the band put on at a US festival earlier this year. Before he took the stage, we sat down with him to chat guitar.

So what’s your role in Duckwrth and how do you work together as a music group?
“I’m the music director and guitarist for Duckwrth. I started playing for Duckwrth back in 2019. We played in Australia for the Groovin the Moo festival. All of the musicians went to Berklee College of Music for the most part. We’ve been a full band for about a few months. We usually get all the materials, all the stems, and then program how the show is going to be. We do that in our own studio at home. Duck is all across the board, with different types of genres as an artist. It’s very collaborative.”
How did you start out in music?
“I grew up in a musical household. My dad was a firefighter and my mom was a country music artist. It was in my mind to either become a firefighter or become an artist. I really connected with my mom because she would tour on cruise ships for the Grand Ole Opry. My dad was very strict but I got Guitar Hero then eventually a real guitar. I went to Oakland School for the Arts. I got a full scholarship to the Academy of Art University in San Francisco. My major was Music Production and Sound Design for Movies & TV. I graduated, moved to LA, and pursued a career in music. I created an all-black collective of musicians, songwriters, and producers called Ghetto Kids. We keep it in house. Now, Duckwrth is going on tour and we’re opening for Billie Eilish in March!”
There’s a long history of hip-hop and rock guitar playing intermixing, but perhaps not in the way you do it – what inspired you to want to do what you do?
“King of Rock by Run-DMC! It was the first time I ever heard rap and rock combined, from the point I felt like anything was possible for a guitarist wanting to change their sound. The transition is easy, just take what you know and apply it.”
Duckwrth
You’ve cited Prince as a big influence, and like him you’re something of a multi-hyphenate, working on film and TV scores, exploring different genres, entrepreneurship… what’s the secret of managing to keep all those plates spinning?
“Always believe in your art and continue to push it, but also allow it to adapt. Prince was and still is an icon. I like to believe that he had his own vision of how he wanted to be perceived, on and off the stage). Once you have a starting point, life kinda does the rest.”
So you’re Duckwrth’s musical director – what does that job entail day to day?
“My job and responsibility as a MD (more or less) is to use the studio recorded track and translate that in a live atmosphere by filling what’s already there with live instrumentation and programming. From the guys that I put on the gig to the live arrangement all play a major part in the development of the artists show.”
You mentioned Ghetto Kids earlier – how did that come to be, and what are you hoping to achieve with it?
“Crazy enough, Ghetto Kids formed during the pandemic when there weren’t any concerts happening. Our goal is to grab musicians with potential and put them in the professional music field – live performance, studio production, television, and film. Be on the lookout for us in the future because we plan to have our hands in some part of every artist’s work down the line.”
J Hawk
You’re a Fender artist, that must have been a really exciting moment for you…
“It felt great, I remember there being times when I didn’t have a guitar at all. And to be with a reliable brand like Fender is a blessing. I’m looking forward to seeing where it’ll take me.”
What’s your advice for aspiring artists?
“Continue to go hard every day. There are obstacles that come into our path. Every time I play, I’m thankful to be in the space.”
Duckwrth tours the UK in January, follow J Hawk on Instagram @jhawkguitarist. Duckwrth’s latest song appears on the soundrack of HBO’s Insecure.
The post Introducing Duckwrth’s guitarist J Hawk – the young musician bringing six strings to modern rap appeared first on Guitar.com | All Things Guitar.