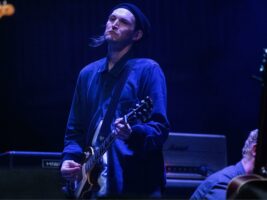 Josh Klinghoffer on his “non-existent” relationship with John Frusciante: “I spent a lot of time being friends with John when we were younger”

Multi-instrumentalist and ex-Red Hot Chili Peppers member Josh Klinghoffer has recently discussed his relationship with John Frusciante in an interview, describing how once he replaced the guitarist in the band, their relationship became “non-existent”.

READ MORE: Josh Klinghoffer Says “The Culture” Is To Blame For Morrissey Album Delay: “I Honestly Don’t Think He’s A Malicious Person, Even If He Says Some Stupid Shit”

Speaking during his latest appearance on a podcast entitled Tuna on Toast With Stryke, the musician described his relationship with Red Hot Chili Peppers’ most renowned guitarist John Frusciante and explained the tumultuous circumstances of their relationship.
According to Klinghoffer, the duo, who have worked together on various projects since the 1990s are no longer in contact following his decision to join the funk-rock band in 2009. A vital part of six of Frusciante’s eleven solo albums (including the most recent release The Empyrean), Klinghoffer reflects back on his relationship with the musician and explains how they came to lose contact.
“I spent a lot of time being friends with John when we were younger. He’s a very dedicated artist and musician. And we spent a lot of time together,” he states. “[As for our current relationship,] I wouldn’t say it’s in flux; it’s pretty non-existent…It’s been that way for 10 years.”
Elsewhere in the interview, Klinghoffer implies that this loss of contact is somewhat related to hostility, stating that Frusciante was left feeling disgruntled by the band’s decision to continue following his departure.
“He knew [that I would join if he left]. There was talk about it before I joined because Flea had asked me.” He elaborates, “there was lots of discussion about it in the summer of that year [2009] but we didn’t actually make sounds together until October. So, from July to October, I was in contact with John and he was in contact with them. And he was having a hard time with that fact that they could even consider going on without him.”
The musician, who first joined RHCP as a touring member in 2007, was kicked out of the band in 2019 after the remaining members decided to have Frusciante rejoin. Releasing just two albums during his time – I’m With You in 2011 and The Getaway in 2016 – Klinghoffer goes on to explain the circumstances of his departure during the interview and reflects upon his time in the band.
“It’s not like it was a monogamous relationship… Flea and John had been kinda hanging out and playing and stuff. They were fostering that relationship again. And I didn’t know that. It was sort of secret,” he admits. “[But] I couldn’t be more grateful to them for all the experiences I’ve had with them. My only regret is not making more music with them.”
Following his leave, Josh Klinghoffer has been predominantly focused on his other musical project, Pluralone. More recently, the musician toured with RHCP drummer Chad Smith once again, supporting Pearl Jam’s Eddie Vedder on the tour for his latest solo album, Earthling.
The whole interview with Josh Klinghoffer can be found on the Tuna On Toast Podcast.
The post Josh Klinghoffer on his “non-existent” relationship with John Frusciante: “I spent a lot of time being friends with John when we were younger” appeared first on Guitar.com | All Things Guitar.