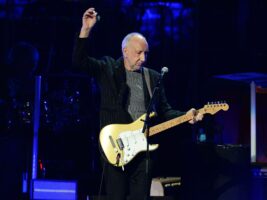 Pete Townshend tells concertgoer who asked for song: “We don’t do fucking requests”

Listen up, The Who fans, for Pete Townsend has made it clear at a recent concert that the band will take song requests from no one.

The band was apparently halfway through a rendition of I Can See for Miles when singer Roger Daltrey experienced a sound issue in his monitors that forced them to cut the performance short. Technicians immediately came to the rescue, solving the problem within a few minutes.
Once they’re back on track, Daltrey and Townshend returned to their microphones, but seemed unsure of which song to continue with. At this point, a fan in the front row shouted Naked Eye, which quickly sent Townshend on a rant on what the band will and will not do at their concert.
“Just shut up,” the guitarist replied. “Just shut the fuck up with Naked fucking Eye, alright? We don’t do fucking requests. However many times I see you, and I love you, you fucking paid for my Ferrari, I’m sure.”
The crowd took the rant in stride, cheering and laughing at the outburst from Townshend, who then looked over to Daltrey and asked him what he wanted to play next.
“Anything you’d like,” the singer said, before cheekily suggesting “Naked Eye.”
“You’re gonna get me to play Naked Eye after all that?” Townshend said, and just like that, the band went on to perform the song, which was originally released on 1974’s Odds and Sods.
Catch the full exchange here:

Kicking off in Fort Lauderdale, Florida, last April, the band is currently on its 29-date The Who Hits Back! tour across North America. Joined by an orchestra throughout their shows, Daltrey and Townshend will be performing songs from their decades-long music catalogue.
The post Pete Townshend tells concertgoer who asked for song: “We don’t do fucking requests” appeared first on Guitar.com | All Things Guitar.