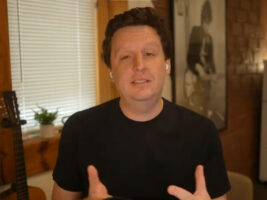 Josh Scott on how pedal demos can be deceiving: “There is always a signal path that you don’t see”

JHS Pedals founder Josh Scott has shared his opinion on the six common problems with guitar pedal demos on his weekly YouTube series The JHS Show.

Describing it as a problem that has been on his mind since starting JHS Pedals, Scott said that some of the notes he had made dated back 15 years. “In all my years doing this I’ve only seen two times where I felt like or I physically knew a demo person was being dishonest with what they were doing,” he added as a disclaimer.
Scott then explained why he felt guitar pedal demos are deceiving, with his first reason (in no particular order) being that due to people largely consuming YouTube videos, and thus pedal demos, through phone speakers and earbuds, “by the time you’re listening to the audio is not honest to the sound that’s coming out of the amp,” though he added that the issue was the least of the problems he had listed.
Secondly, he warned, “There is always a signal path that you don’t see. There’s always post and pre-EQ, compressors and preamps”. This was also tied in with reason three, he explained, which is post-production. While Scott did explain that mixing is required to bring sounds together to make it sound good, viewers should always keep in mind that the signal has already been mixed.

He then brought up that most players won’t be using the same gear, whether it be a guitar or an amp. “As minimal as it can be it’s still a factor. We just don’t have the same gear,” he explained, before also going on to state that individual playing ability is also a factor as more talented players like pedal demo experts Pete Thorne and Sean Tubbs can “take a DOD Grunge and make it sound like five, six different pedals”.
Scott then brought up his final topic, bias. Explaining that he felt that demo channels making money from demoing is a positive thing as many creators not only demo the pedal but create songs and sounds to demonstrate its capability, Scott also stated that while he could only speak for himself, the JHS Show does not accept monetary payment to showcase pedals.
Scott recently weighed in on Fulltone’s reported closure, and what all of this could mean for the boutique pedal industry in a late August episode of the JHS Show. While he thought it was “interesting that this boutique era has this ideal [that] we’re gonna make things by hand, we’re gonna take more time with it, we’re gonna make fewer things,” Scott said of the closure, “I think that Fulltone signifies the ending of this era. There’s really nothing left.”
The post Josh Scott on how pedal demos can be deceiving: “There is always a signal path that you don’t see” appeared first on Guitar.com | All Things Guitar.