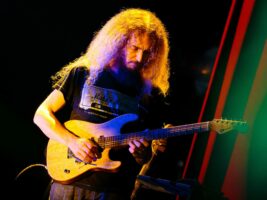 Guthrie Govan has stated that when it comes to creating new music, he believes ‘thinking like a vocalist’ is the best way to ensure his music is both unique and speaks to the masses.

READ MORE: You Can Now Rent Out A Tiny Guitar-Shaped House on AirBnb

From performing live with Hans Zimmer to taking musical technicality to a new level with his supergroup, The Aristocrats, guitar virtuoso Guthrie Govan has shared one of the main reasons why he believes his music speaks to quite so many non-musicians.
In an interview with Guitar World yesterday (5 September), Govan shared that when it comes to creating new music, he thinks it is vital to not approach songwriting as a guitarist but to channel the mindset of a vocalist instead.
“I think that can be extremely useful,” he explains. “Firstly, thinking like a vocalist encourages you to incorporate breathing into your phrasing, and I sense that listeners always respond well when a melody has that human, singable quality.”
He continues, explaining that disregarding his knowledge of theory often leads to him discovering more unorthodox note choices.
“Secondly, the mindset of trying to make your guitar ‘sing’ can often help to liberate you from the trap of allowing the fingerboard to dictate the melody for you. If you’re thinking too much like a guitar player, there’s sometimes a danger of writing something purely because it sits comfortably within a scale shape or because it resembles one of your favourite licks, rather than searching for notes which actually mean something to you.”
“In terms of your audience, the ‘serious guitar player’ contingent might well be analysing the way your fingers are moving […] but anyone else, subconsciously or otherwise, will be listening at least partially on the assumption that your guitar is trying to sing something to them.”
Elsewhere in the interview, the guitar icon also explains why he feels closer with his audience when performing instrumental work – stating how he firmly believes it is a “more direct line of communication”.
“When there’s no lyrical content in a song, the language barrier ceases to be a problem!” He elaborates, “I have fond memories of having performed instrumental music in some unusually far-flung and exotic locations and one thing I’ve consistently taken away from such experiences is that the challenge of connecting with people suddenly feels refreshingly effortless as soon as I’m on the stage.”
The post Guthrie Govan says he has to ‘think like a vocalist’ when writing songs on the guitar appeared first on Guitar.com | All Things Guitar.