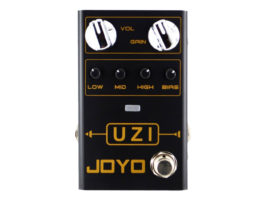 This pedal packs some serious heat.

Having launched its R-series with the Tauren Overdrive last week, Joyo has kept up the pace with a second addition: the Uzi Distortion.
The Uzi is a versatile drive pedal that serves up tones ranging from warm amp-driven overdrive to piercing heavy metal distortion. Its drive sounds are inspired by classic Marshall amps such as the JMC 800 and 900.
In terms of controls, the pedal has a three-band EQ, as well as “Volume”, “Gain” and “Bias” knobs. The latter can be tweaked to dial in classic American and British Distortion presets. With a different combination of settings, though, the pedal can unleash a heavier, grungy distortion.
The Uzi features the same LED ambient lighting system as the Tauren, which may prove useful on a dim stage.
Check out the pedal in action here:

Retails at £49.95. More information at joyoaudio.co.uk.
The post Joyo launches the Uzi Distortion appeared first on The Guitar Magazine.