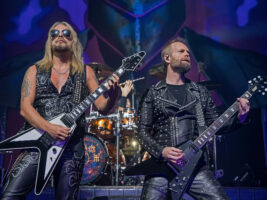 Judas Priest have walked back on plans to tour with just one guitarist, following a significant backlash to the announcement from fans.

Judas Priest last played as a four-piece in 1974, before the arrival of guitarist Glenn Tipton. For most of the band’s career, Tipton played alongside guitarist KK Downing, before his departure in 2011. Downing was replaced by guitarist Richie Faulkner.
Guitarist Andy Sneap began filling in for most of Tipton’s appearances in 2018, as Tipton’s battle with Parkinson’s disease left him unable to tour consistently. However, the heavy metal band announced earlier this month that they would embark on their upcoming 50th anniversary tour as “an even more powerful, relentless four piece heavy metal band,” dropping Sneap from the lineup, leaving their only guitarist as Faulkner.

Fan response on social media was overwhelmingly negative. Many commenters pointed out how integral dual-guitar harmonies are to Judas Priest’s music, and expressed their frustration at the decision with comments such as: “Terrible, awful news. So disappointed,” and “Love Priest but I’m really not sure how it’ll work with just the one guitarist.”
Less than a week later, the band returned to social media to update fans. In a statement posted on 15 January, they wrote: “given all that has recently evolved and transpired we have decided unanimously as a band to continue our live shows unchanged with Rob, Ian, Richie, Scott, Andy and Glenn joining us whenever he’s able… so see you all soon as we forge ahead celebrating 50 massive heavy metal years of Judas Priest together!”