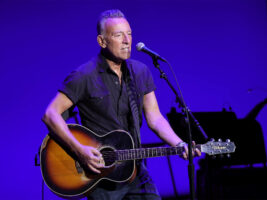 Bruce Springsteen has been ranked as 2021’s highest-paid musician, after the sale of his catalogue of songs brought his total estimated earnings to almost $600 million, according to a new report by Rolling Stone, which ranked the top-ten earning musicians and bands of 2021

The sale of Springsteen’s songs to Sony took place in December of last year, and at the time was estimated to be around $500 million. The latest estimates, however, place the sale at $550 million – a gargantuan sum that gives Sony the publishing rights and masters to over 300 songs, 20 studio albums, seven EPs, 23 live albums and more.
Rounding out the nine-figure sum was Springsteen’s continued presence on Broadway, as well as his collaboration with ex-president Barack Obama, Renegades: Born In The USA. The latter project was both a book and a podcast, and helped Springsteen hit a total estimated earning of $590 million for 2021.
Springsteen was joined on the top-ten list by (in descending order) Jay-Z, Paul Simon, Kanye West, Ryan Tedder, Red Hot Chili Peppers, Lindsey Buckingham, Mötley Crüe, Blake Shelton and Taylor Swift.
The recent boom in catalogue sales has greatly impacted the shape of the list, with only Jay-Z, Kanye West, and Taylor Swift placing on the list without having inked a multi-million catalogue deal. For instance, without the $90 million from their catalogue sale (first estimated to be $150 million), Mötley Crüe’s 2021 earnings would have been around $75 million below Taylor Swift’s.
You can see the list in full over at Rolling Stone.
The post Bruce Springsteen was 2021’s highest-paid musician, earning almost $600 million appeared first on Guitar.com | All Things Guitar.