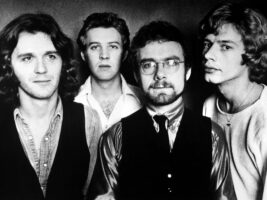 Kanye West’s label hits back at “underpaying” allegations, says it’s paying more for King Crimson sample than it has to

Universal Music Group (UMG) has hit back at allegations that it has been underpaying for a King Crimson sample on Kanye West’s Power, arguing that it’s in fact paying more than it is legally required to.

Declan Colgan Music Ltd. sued UMG in March, claiming that the label has not paid the prog rock band the agreed streaming royalty rates for West’s sample, which was pulled from the band’s 1969 song 21st Century Schizoid Man.
According to the Variety, mechanical rights holder DCM is claiming that UMG “failed, and continues to fail, to comply with its royalty accounting obligations” by underpaying royalties for the sample of the King Crimson track used in West’s single.
UMG and DCM reportedly had an agreement in place to pay the band a royalty rate of 5.33 per cent for copies of Power that are sold or “otherwise exploited,” with a specific clause that states that UMG has to pay the same for streaming royalties as it would for a song from a physical CD.
DCM claims UMG violated that deal by paying based on a percentage of streaming revenue that amounts to less than CD sales would.
Robert Fripp of King Crimson has chimed in on the lawsuit, commenting on Facebook that “This dispute has been dragging on for several years, unnecessarily IMO.” He also mentioned that there’s a “longer story to be told”, one that would likely “astound innocents and decent”.
Responding to the lawsuit, UMG called DCM’s interpretation of the license agreement “commercially nonsensical” and said that would have been a non-starter when the deal was signed twelve years ago.
“A purchase of a CD gives permanent ownership of a copy of the recording, which entitles the owner to play the recording as many times as they wish,” UMG wrote in the filing (via Billboard). “By contrast, exploitation of a recording via a streaming service or platform is ephemeral, and only provides the listener or subscriber with conditional access to, rather than ownership of, the recording.”
“The latter is of an intrinsically different nature to the former, and the price of such usage is accordingly very much lower,” said UMG.
In short, UMG is saying it has paid all of the royalties it should to DCM.
The label even told the court that it has actually been paying on a “more generous basis than the claimant is in fact entitled to,” and said it was entitled to recover the extra payment from DCM.
The post Kanye West’s label hits back at “underpaying” allegations, says it’s paying more for King Crimson sample than it has to appeared first on Guitar.com | All Things Guitar.