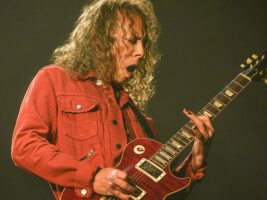 Metallica guitarist Kirk Hammett has opened about the creative process behind his first solo EP, revealing that he intentionally stayed away from the way his mentor Joe Satriani made his albums when he was creating Portals.

Recalling Satriani’s teachings in a recent interview with Guitar World, Hammett said: “Joe’s influence is just in me. It’s part of my guitar style because he showed me all these different exercises. He showed me modal thinking and music theory, how to get melodies out of certain chords and how to make chords out of certain melodies.”
“All that stuff that he taught me way back is still with me to this day. That stuff will always be a part of me, and it’ll never ever go away because it’s intrinsic in the way I express myself, and I’m so grateful to Joe for giving me those tools.”
Apart from the words of wisdom left from his sessions with Satriani, the Metallica guitarist also talked about his experience writing instrumentals for his horror-themed EP, saying that it’s nice to not have to worry about a song’s structure for once: “It was great that I was able to get out of that structure of riff, verse, chorus, huge middle part, then back to the riff, verse and chorus. I’m glad I was freed of that and free to go wherever the music wanted to go.”
And when asked if he’ll dabble in more soundtrack work in the future, Hammett replied, “Yeah, absolutely.”
“That’s pretty much in the cards and it’s pretty much a given for the future. I was pretty active during Covid, writing a ton of different types of music. I wrote Metallica music, I wrote the Portals music – all different types of music that I’m sitting on, and it’s a lot of varied stuff. I can safely say that I’m not done writing this type of music because I really, really enjoy it and it feels different.”
He continued, “Going back to Joe Satriani and the way he does his albums – his approach is very traditional, and I purposely stayed away from that. What happened when he started putting out albums was he created a template for a lot of other guitarists to copy on their own solo albums.”
“That’s great – I’m not knocking that – but I just wanted to do something different that’s never been done before.”

The post Kirk Hammett on why he “purposely stayed away” from mentor Joe Satriani’s approach to albums with his solo EP appeared first on Guitar.com | All Things Guitar.