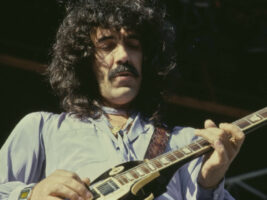 Manny Charlton, founding guitarist of legendary Scottish rock band Nazareth, has passed away at 80.
News of Charlton’s death was confirmed by Charlton’s grandson, who paid tribute to the guitarist in a Facebook post on 6 June. No cause of death has been revealed as of the time of writing.
Charlton formed Nazareth in 1968 with vocalist Dan McCafferty, bassist Pete Agnew, and drummer Darrell Sweet, going on to release 17 albums with the graoup. He would eventually retire from the band in 1990 to go solo, having achieved platinum status in the US with Nazareth’s sixth LP Hair Of The Dog, their only release to reach the Top 10 on US charts.
His last solo album, Solo, was released in 2016.
Charlton also famously produced all of Nazareth’s material prior to his retirement, which led to Guns N’ Roses frontman Axl Rose initially seeking him out to produce Appetite for Destruction, telling Geffen A&R man Tom Zutaut, “Get me the guy who produced Hair Of The Dog.”
While Charlton did not end up producing the album, he recorded as many as 25 demos with Guns N’ Roses while they were developing Appetite for Destruction in 1968 at the Sound Studios in Los Angeles, including early versions of hits songs like Welcome To The Jungle and Paradise City, and rough early takes of Reckless Life and Move To The City.
The Sound City sessions were eventually released as part of a deluxe edition of Appetite for Destruction in 2018. It was the first time the recordings had been released in high definition, as only bootlegs existed previously.
Nazareth remain active, most recently releasing the LP Tattooed On My Brain in 2018. The band’s only remaining founding member is Agnew, having recruited guitarist Jimmy Murrison in 1994 before bringing in his son Lee as a drummer in 1999. Vocalist Carl Sentance of Persian Risk fame is the band’s most recent addition, having joined in 2015.
The post Nazareth founding guitarist Manny Charlton has died at 80 appeared first on Guitar.com | All Things Guitar.