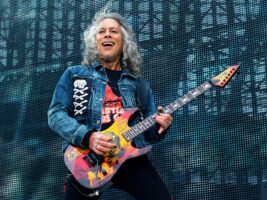 With the anniversary celebrations for Metallica‘s seminal self-titled 1991 LP, aka The Black Album, well under way, Kirk Hammett has again been discussing its influence and impact.

Hammett discussed the early beginnings of The Black Album with Total Guitar, including what influenced its iconic opening track, Enter Sandman, the success of which helped the album amass over 16 million sales in the US alone.
“Back in ’89 I’d just discovered this new musical movement coming out of the Seattle area,” Hammett reveals. “I was listening to a lot of Soundgarden. I was pretty impressed with the rawness of their sound and how heavy it felt.
“One thing we spoke about as a band was how much we all like bouncy riffs. So I was just sitting there with my guitar at three o’clock in the morning, thinking: ‘Soundgarden, bounce, flattened fifths…’ Almost simulating my mind to those sounds. And then this riff came out and I thought, ‘Whoah, that works!’”
It’s not the first time that Hammett has made the connection between the Enter Sandman riff and Soundgarden. In a 2017 interview with 98.5 The Sports Hub, he cited the Seattle band’s Louder Than Love album as a direct influence.
Famously, former Metallica guitarist and Megadeth frontman Dave Mustaine claimed in an interview in 2004 that the Enter Sandman riff was copied from the band Excel. Metallica’s manager, Cliff Burnstein, said that the band had never heard the Excel song but agreed that there were similarities.
For more news, click here.
The post Kirk Hammett reveals that the Enter Sandman riff was inspired by Soundgarden appeared first on Guitar.com | All Things Guitar.