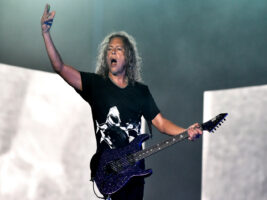 Kirk Hammett has admitted he was surprised by how much of a fan of Metallica Kurt Cobain was.
In an interview with Classic Rock magazine, where the guitarist was discussing the band’s seminal LP, The Black Album, and it’s wider impact on music ahead of its 30th anniversary, Hammett discussed his friendship with the Nirvana frontman, revealing that he “was surprised at how much of a Metallica fan he was.”
“Kurt Cobain came to one of our shows in Seattle, on the Black Album tour,” he said. “I knew Kurt kind of well, and I hung out with him quite a bit. He was a pretty big Metallica fan.”
Hammett also expanded on the impact he thinks The Black Album had in helping the mainstream accept more alternative music, and indeed priming fans for Nirvana’s success. “Rock radio embracing our sound – our heaviness – helped the whole grunge thing take hold. Not long after The Black Album came out, Nirvana put out Nevermind. I like to think we had something to do with the acceptance of Nirvana.”
Expanding on the legacy of Metallica’s now legendary album, Hammett says, “It’s a cultural force in itself. As much as modern culture changes and morphs, there’s something within that album that continues to resonate around the world. And I mean the world, because it’s big everywhere.”
Metallica’s The Black Album celebrates its 30th anniversary this month, Nirvana’s Nevermind will also celebrate its 30th anniversary on September 24.
For more news, click here.
The post Kirk Hammett says he’s “surprised” that Kurt Cobain was a Metallica fan appeared first on Guitar.com | All Things Guitar.