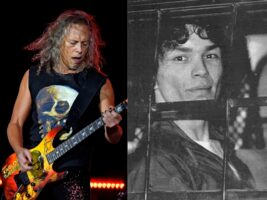 Of the countless Metallica fans around the globe, it has recently been revealed that serial killer Richard Ramirez, otherwise known as The Night Stalker, was a fan of the thrash metal icons, and was left furious when not permitted to see them perform live.

READ MORE: Kirk Hammett Says The Huge Number Of New Guitarists Born Out Of Lockdown “Bodes Very Well For The Future Of Music”

Speaking with NME recently, thrash metal guitarist Kirk Hammett explained the circumstances in which he discovered that the infamous killer was a Metallica fan and shared what he considers to be a “token” given by Ramirez.
The topic arose when Hammett was asked during the interview to name who he considers to be the “most unexpected person” who turned out to be a Metallica fan, to which he answered Richard Ramirez: a notorious serial killer who was convicted of multiple counts of murder, rape and other crimes, and died in prison in 2013.
Detailing how he first made this discovery, the guitarist revealed a situation that occurred during the band’s 2003 performance in San Quentin Prison – where Ramirez was an inmate.
“When we played San Quentin Prison, he was on death row and could hear us,” Hammett explains. “The guards who were responsible for watching him said Richard Ramirez was pissed off and pacing his cell because he wasn’t allowed to see us.”

This performance also played host for Metallica as they filmed the music video for their single, St. Anger. While enraged that he was unable to see the band play live, Hammett documents how the killer, who had already been on death row for over a decade at this point, passed on a magazine to the guards, which he now considers to be somewhat of a souvenir from Ramirez.
“He gave the guards his subscription copy of a magazine with us on the cover and on the mail tag it said: ‘Richard Ramirez, San Quentin Prison.’… So that’s my little token from Richard Ramirez. Not to glorify the guy – he did some horrible crimes.”
Elsewhere in the interview, the musician also discussed how he may have bumped into the rapist and serial killer while he was part of the band Exodus, prior to his capture in 1985.
“He hung out in Richmond California, and I wonder sometimes if me and the guys from Exodus were at the same parties as him back in the day,” he ponders.
The full interview with Kirk Hammett can be found on NME.
The post Kirk Hammett shares the “Token” he received from serial killer Richard Ramirez appeared first on Guitar.com | All Things Guitar.