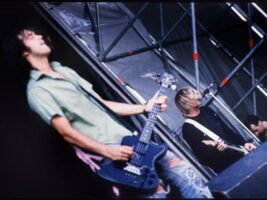 Krist Novoselic recalls shopping for record deals for Nirvana with Kurt Cobain: “No one was really impressed with us”

Kirst Novoselic has revealed what it was like to shop for a record deal with Kurt Cobain, in the days before Nirvana signed with Geffen Records in 1991.

READ MORE: 18-29 year-olds are more likely to play the guitar than any other demographic, study shows

Novoselic was speaking in a new interview with Rick Beato, where he, Kim Thayil and Jack and producer Jack Endino spoke of grunge days past.
After deciding that Nirvana wanted their own record deal outside of Sub Pop, Novoselic and Cobain were encouraged by Soundgarden manager Susan Silver to head to Los Angeles in search of a major deal.
It was, as Novoselic told, Beato, much harder than they anticipated. “We drove nonstop, Kurt and I in this van, and we would sleep in this parking lot, and then we would go to our meetings.”
“No one was really impressed with us, we didn’t really have the looks or anything,” Novoselic recalled. “We were just kind of shaggy, and people would think ‘who is this weird tall guy’”.
You can watch the full interview below:

Despite the lack of success in finding a label, the bassist explained that the California trip led to their meeting Dave Grohl, who at the time was drumming for the hardcore band Scream.
After Scream disbanded shortly afterwards, Novoselic said he and Cobain invited the drummer up to Seattle, and then “he just never left”.
The post Krist Novoselic recalls shopping for record deals for Nirvana with Kurt Cobain: “No one was really impressed with us” appeared first on Guitar.com | All Things Guitar.