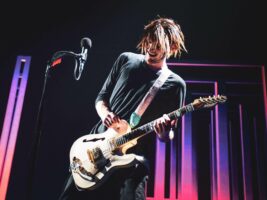 Former Red Hot Chili Peppers guitarist Josh Klinghoffer is not a fan of producer Rick Rubin, whom he describes as “way more a hindrance than a help” to the band’s studio sessions.

Speaking with Vinyl Writer Music in a new interview, Klinghoffer reflects on his decade-long stint with the Chili Peppers, and admits that he has mixed feelings about the music he’s made with the group.
“I’m incredibly conflicted about my output with that band because I feel like, in both circumstances, producers got in the way of us truly making great music or a great record,” says the guitarist. “I like almost all of the songs that we wrote together, but seldom did we capture them in the best way.”
It was the experience of working with Rubin on the band’s tenth studio album I’m With You, in particular, that Klinghoffer took issue with.
“I feel Rick Rubin was way more a hindrance than a help,” the rocker explains. “He told me once, ‘I just want to help the songs be the best they can be.’ I should’ve said, ‘Well, then get your driver to come and get you.’”
Hired in 2009 after John Frusciante’s departure, Klinghoffer appeared on two RHCP albums — 2011’s I’m With You and 2016’s The Getaway — before he was fired in 2019 to make way for Frusciante’s return.
In 2020, the artist told Rolling Stone that he felt like “the odd man out” while recording I’m With You, saying it’s difficult to have a voice as a “new little pissant in the corner” when the other members have a 25-plus-year relationship with Rubin.
“Like no one else in the band is going to listen to me; they’re going to listen to their friend who they’ve known and worked with and collaborated with successfully for ages,” said Klinghoffer.
He also revealed that Danger Mouse was chosen as The Getaway’s producer just so he didn’t have to work with Rubin again.
The post “Rick Rubin was way more a hindrance than a help” Josh Klinghoffer on RHCP recording sessions appeared first on Guitar.com | All Things Guitar.