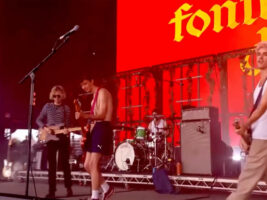 Irish post-punk band Fontaines D.C. invited a teenage fan to join them onstage at Reading Festival over the weekend to play guitar on their track, Boys In The Better Land.

16-year-old Dexter Dobel, who has a band of his own called Alloys, reflected on the moment in a post on Instagram where he wrote, “So I played on Reading main stage with one of my all time favourite bands… crazy. After holding up a sign asking to play guitar on ‘Boys In The Better Land’ with Fontaines D.C., the guitarist @carly_rings spotted me and I was helped over the barrier by security. They checked that I could play backstage before getting me up to play where I met the band onstage. From there it was all such a blur but you can see just how happy I was in the moment and because of that I oddly didn’t feel that nervous.”
He continued, “After that I was escorted back to the crowd where friends and family were frantically texting and calling saying they’d just seen me playing from the crowd or on live TV. 3 years ago I saw the band play at a tent in Gunnersbury Park and 2 years ago I was covering ‘Boys In The Better Land’ with my band @alloys_band in my school practice room so to be onstage with them… wow.”
You can watch the full performance of the track in the post below:

Fans in the crowd were elated with Dobel’s performance, with some having tweeted about the moment. One Twitter user shared a photo of young Dobel with the poster that caught the eye of guitarist Carlos O’Connell, writing in the caption, “I hope Dexter goes on to make music and get the crowd hyped again in his own band in the future.”

The best moment of this years Festival , great of the band to let him share their stage & give him the chance to experience the magnitude of playing a festival crowd .I hope Dexter goes on to make music & get the crowd hyped again in his own band in the future. pic.twitter.com/ZMEAj7nbU6
— Boz Boston (@BozBoston) August 29, 2022

You can catch up with the highlights of Reading and Leeds Festival through the BBC iPlayer here.
The post Watch: 16-year-old fan plays guitar with Fontaines D.C. at Reading Festival appeared first on Guitar.com | All Things Guitar.