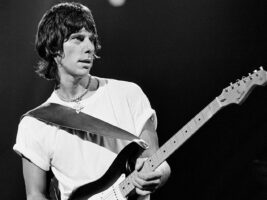 Learn to play guitar like Jeff Beck in five minutes

Jeff Beck is often described as the ‘guitarist’s guitarist’. But what does that really mean? Well, for starters, Beck is a player who never seems comfortable standing still – he’s always pushing himself in terms of technique, style and genre, which is part of what makes him one of the all-time greats.

But there are some things that have remained constant throughout his long and varied career – he loves a tremolo bar scoops and pulling up the bar to target notes. You’ll also discover his fingerstyle licks and his aggressive picking style.
So, grab your floating tremolo Strat and let’s take a quick dive into some of Jeff’s techniques. All the licks in this lesson are in the key of D Major.
Tremolo Bar Note Targeting

Don’t let the lack of notes in this lick fool you – there’s some tricky technique here. That’s because it’s all about using the guitars tremolo to raise the pitch of notes to target others. This is what gives Beck’s playing a very slide guitar-like quality.

This is fairly simple to play without the tremolo action, and the rake into the string bend is pretty standard stuff, but when you are holding that bend, hit the tremolo arm to get a flutter to the note.

One thing that you’ll hear a lot in the Jeff Beck guitar playbook is his use of tremolo scoops and dips just before playing a note. This lick makes use of these scoops and dips to give the notes an interesting texture and feel. In your own playing, you can vary the amount you scoop the bar to increase the intensity of the effect.

Quite often, Beck will use chords that sit under the song and play targeted notes or runs to suit the chord progression. The progression under this lick uses a pattern that contains Dsus4, A, E and G chords. The first bar plays through a series of twin note pairs that outline this chord, ending on the high D note. The second bar has a C♯ note, which is in the A chord and uses the tremolo to pitch it up to a D note from the D chord that follows. The final bar uses G and D notes to outline the chords at this part of the track.

About the author
Leigh Fuge is a guitar teacher and professional musician from Swansea in the UK. He has taught hundreds of students face to face and via the MGR Music platform. He has over 10 years’ experience working in the industry as a touring musician, session guitarist and teacher.
For more lessons from your favourite guitar players, click here.
The post Learn to play guitar like Jeff Beck in five minutes appeared first on Guitar.com | All Things Guitar.