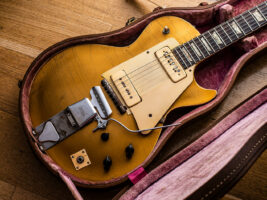 Les Paul’s son Gene tells the story of the Les Paul Number One: “Gibson said ‘Thanks but no thanks’”

Guitar collectors will have a shot at the Les Paul Number One, owned and lovingly modified  by its namesake creator at an auction next month. Ahead of the sale, Gene Paul has taken part in a featurette detailing how his father developed the iconic instrument.

READ MORE: An oral history of the Gibson Les Paul

The video offers insight into Les Paul’s process to creating the iconic instrument – from when he first came up with the idea while performing at a barbecue stand in the late 1920s to bringing early prototypes to Gibson.
“They said, ‘Thanks but no thanks’,” recalled Gene of his father’s first meeting with Gibson. “Gibson even came up with the thing where they marked dad as ‘The guy with the broomstick with the pickups on it!’ And he didn’t mind, because he knew one day, ‘It’s going to be Gibson.’”
Later on in 1950, Gibson approached Les Paul to see if he was still interested in developing a solid-body electric guitar with the company. “Took Dad two seconds to answer that one!” Gene said.
“It took two years [going] back and forth and back and forth and finally, around 1952, they shipped him a guitar to approve,” he said. “When this one showed up, that was it. Dad said, ‘We’ve got it. This is the one we’re going to go with, start manufacturing. And Dad said to me, ‘This is my number one’.”

The post Les Paul’s son Gene tells the story of the Les Paul Number One: “Gibson said ‘Thanks but no thanks’” appeared first on Guitar.com | All Things Guitar.