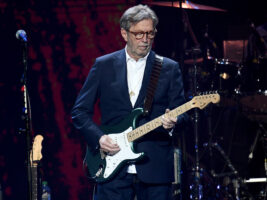 Eric Clapton has broken his vow to not play venues with a vaccine mandate, taking to the stage at the Smoothie King Center in New Orleans on Saturday (18 September).

In July, the 76-year-old musician declared that he would “not perform on any stage where there is a discriminated audience present” in response to UK Prime Minister Boris Johnson’s announcement at the time that COVID-19 vaccine passports would be mandatory for entry to the country’s venues (those vaccine passport plans were ditched earlier this month).
Clapton effectively undid his stance when he played the Smoothie King Center, which required ticket purchasers, staff and participants to submit a negative test taken within 72 hours or show proof that they’ve had at least one dose of the COVID-19 vaccine. These stipulations fall in line with New Orleans government regulations.
Furthermore, audiences had to mask up during the show and refrain from eating or drinking.
Clapton has voiced his discontent with COVID-19 safety measures several times during the pandemic, all while being vaccinated himself. In November 2020, he teamed with Van Morrison on the anti-lockdown songs Stand And Deliver and The Rebels.
More recently, he dropped the single This Has Gotta Stop, which seemed to criticise vaccination policies, with lyrics such as “I can’t move my hands, I break out in sweat”, alluding to his own experiences from taking the AstraZeneca vaccine.
Clapton’s next show is set to happen later today (21 September) at the Bridgestone Arena in Nashville, Tennessee. According to the venue’s website, it too will require audiences to produce a negative COVID-19 test or vaccination card for entry.
The post Eric Clapton has broken his vow to never perform at venues with a vaccine mandate appeared first on Guitar.com | All Things Guitar.