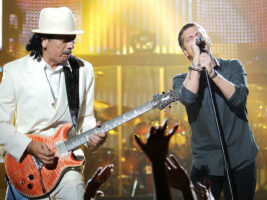 Just a cool 22 years after their transcendental megahit Smooth, Santana and Rob Thomas have once again joined forces for a new single, entitled Move.

Santana and Thomas are also joined by American Authors on the new single. Carlos Santana said of the recording: “Move came about very much like how Smooth happened. It was like divine intelligence behind the scenes, and I just knew I had to record it with Rob. The song is about awakening your molecules. Ignite and activate yourself – you know, move. When Rob and I work together, we have a sound that’s splendiferous.”
1999’s Smooth has set expectations high for this new single, as the unlikely combo of Santana and Thomas won three Grammy awards and went Platinum in the USA. Take a listen to Move below.

The new track is the first single off Santana’s new record Blessings And Miracles, set to arrive on 15 October. It’s been recorded over the last two years, and features collaborations with the likes of Kirk Hammett, G-Eazy, Chris Stapleton and the late Chick Corea.
Production became more challenging thanks to COVID-19, however Santana explained how collaborations kept going throughout the lockdowns: “It’s amazing how we can record together these days without being in the same studio.
“I just close my eyes and I’m in the same room with whomever I’m playing with, even if they’re somewhere far away. We share frequencies together.”
“But, of course, I’m honoured to work with such incredible artists,” he added. “I’m a surfer riding those waves that become songs by different artists, creators and architects. I’m very fortunate that I have the opportunity to do that. It’s a gift I don’t take for granted.”
Its full star-studded tracklist is below.
1. Ghost of Future Pull/ New Light
2. Santana Celebration
3. Rumbalero (featuring Salvador Santana & Asdru Sierra)
4. Joy (Carlos Santana & Chris Stapleton)
5. Move (Carlos Santana, Rob Thomas, Zac Barnett & American Authors)
6. A Whiter Shade of Pale (featuring Steve Winwood)
7. Break (featuring Ally Brooke)
8. She’s Fire (Diane Warren, G-Eazy & Carlos Santana)
9. Peace Power (featuring Corey Glover)
10. America for Sale (featuring Kirk Hammett & Marc Osegueda)
11. Breathing Underwater (featuring Stella Santana, Avi Snow, MVCA)
12. Mother Yes
13. Song for Cindy
14. Angel Choir (featuring Gayle Moran Corea)/ All Together (featuring Chick Corea)
15. Ghost of Future Pull II
The post Listen: Santana and Rob Thomas reunite for “splendiferous” new single Move appeared first on Guitar.com | All Things Guitar.