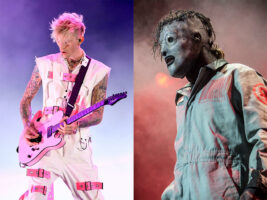 Following the fallout from his disparaging comments against the metal band Slipknot, Machine Gun Kelly has doubled down, and claimed that he was just responding to a “bitter” Corey Taylor who “talked shit” after his “fucking terrible” verse wasn’t included on Tickets To My Downfall. Taylor has responded by posting “#receipts” in the form of screenshots of emails from Travis Barker sharing positive notes about the verse from Kelly.

In between songs at Riot Fest over the weekend, Kelly took the opportunity to say he was glad he wasn’t “50 years old wearing a fucking weird mask”, right as Slipknot were also performing at the festival. The prevailing theory as to why Kelly decided to lambast Slipknot put it down to comments frontman Corey Taylor made a while ago seemingly criticising him, although he didn’t mention him by name. Seeing these, Kelly decided to add some extra context.

corey did a verse for a song on tickets to my downfall album, it was fucking terrible, so i didn’t use it.he got mad about it, and talked shit to a magazine about the same album he was almost on.yalls stories are all off. just admit he’s bitter.
— blonde don (@machinegunkelly) September 20, 2021

“Corey did a verse for a song on tickets to my downfall album, it was fucking terrible, so i didn’t use it,” he tweeted. “He got mad about it, and talked shit to a magazine about the same album he was almost on. Y’alls’ [news] stories are all off.”
He then concluded by politely requesting news outlets “just admit [Corey Taylor] is bitter.”
Taylor’s version of events is quite different, and seemingly backed up by evidence. “I don’t like people airing private shit like a child,” he began in his own tweet. “So this is all I’ll say: I didn’t do the track because I don’t like when people try to ‘write’ for me. I said NO to THEM.”
The screenshots Taylor posted consist of two emails: one from Travis Barker, drummer for Tickets To My Downfall, to Taylor, and another from Taylor in response to the first. The email from Barker offers up notes from Kelly on a guest verse Taylor had sent over for inclusion on the album. The notes include the following comments: “Can you tell him he fucking killed it and I’m stoked and HONOURED he is even on it, wtf!!!!”, and “fuck yeah tell him he rocks.”

I don’t like people airing private shit like a child. So this is all I’ll say: I didn’t do the track because I don’t like when people try to ‘write’ for me. I said NO to THEM. So without further ado…. #receiptsThis is all I’m going to say about it. pic.twitter.com/pkhweg1Ptn
— SHRED DJENT REDEMPTION (@CoreyTaylorRock) September 20, 2021

Between these two notes are a few ideas for some changes, however. The second email, from Corey, lays out his response to these changes. “I don’t think I’m the right guy for the track. Nothing personal, I just think if this is what MGK is looking for, someone else is the guy to do it.”
If these emails are to be believed, Kelly’s own story is heavily called into question. His original tweet asserts “I didn’t use it,” however Taylor’s email shows him deciding to not appear on the album, rather than being dropped by Kelly.
Attempting to bring the short-lived but nevertheless exhilarating feud to a close, Taylor ended his tweet with: “This is all I’m going to say about this.”
Seemingly ignoring this, Machine Gun Kelly then responded to Taylor directly and publicly, writing: “Basically, your verse was really bad. Respectfully, I was just telling you to rewrite it because it was really bad. Respectfully.” His assertion that he was the one to call off the collaboration, rather than Taylor, is still disputed by these screenshots.
Offering a bizarre olive branch, Kelly then said: “But let’s do a Britney Spears song cover together.” The amount of sarcasm imbued in this statement is hard to gauge, but is likely more than zero.
The post Machine Gun Kelly claims Corey Taylor is “bitter” after having a “fucking terrible” guest verse rejected, Taylor responds appeared first on Guitar.com | All Things Guitar.