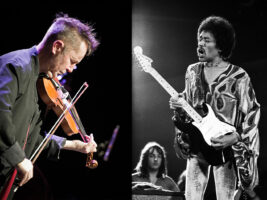 Violinist Nigel Kennedy has cancelled an upcoming Royal Albert Hall performance with less than a week’s notice, claiming that UK radio station Classic FM vetoed a performance of a tribute to Jimi Hendrix.

Kennedy, whose violin recordings are the best selling of all time, has recorded a number of Jimi Hendrix tributes. He was planning to play Little Wing along with Chineke!, an orchestra founded by Chi-chi Nwanoku with the intention of giving a platform to young black and ethnically diverse musicians.
Kennedy told the Guardian: “This is musical segregation. If it was applied to people, it would be illegal. If that type of mentality is rampant in the arts, then we still haven’t fixed the problem of prejudice. This is much more serious than my feathers being a bit ruffled. Prejudice in music is completely dreadful. They’re effectively saying that Hendrix is all right in the Marquee Club, but not in the Albert Hall.”
He also claimed that he would not have been given enough rehearsal time, and was also being pressured into performing Vivaldi’s The Four Seasons instead, adding: “They were telling me that I had to do it with a conductor, which I’ve never done. The communication between myself and the orchestra is much better than having someone doing semaphore in between them and myself…
“The Berliner Philharmoniker, the best orchestra in the world, never asked me to have a conductor and they never asked me not to rehearse. They take a joy in rehearsing in order to get deeper into the music … I’ve got a name for Classic FM: Jurassic FM.
“My whole career has been about bringing down barriers,” he said. “[Hendrix is] one of the foremost composers of the 20th century, along with Stravinsky and Duke Ellington. He brought all types of music together and broke down barriers. Before he died, he was talking about taking his music into a more symphonic area. I feel such an affinity with his music.
“Little Wing belonged much more in a classical music concert than my Four Seasons, where I’m quite likely to drag out an electric violin or get a massive group improvisation going on.”
Chineke! founder Chi-chi Nwanoku added: “We had nothing to do with Nigel pulling out of this. It’s not up to us what we play in the Classic FM concert. It was decided by Classic FM, who rightly insist that repertoire played at their annual Royal Albert Hall concert is familiar to their loyal listeners. They did not want Jimi Hendrix on Classic FM. No blame should be laid at our feet.
“We were so keen to do the concert with Nigel and had agreed to his request not to have a conductor for The Four Seasons and an extra rehearsal. We’re proud of our collaborations with other genres, including Carl Craig and Stormzy.”
The post Violinist Nigel Kennedy cancels concert after Classic FM vetoes his Jimi Hendrix tribute appeared first on Guitar.com | All Things Guitar.