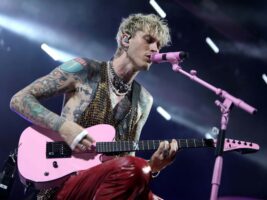 Machine Gun Kelly got the world talking once again as he was captured smashing a glass in his face (for the second time in just months) to express his feelings about the concert venue’s overtime fees.

READ MORE: The Genius Of… Total Life Forever by FOALS

At his hometown show in Cleveland on August 13 as part of his Mainstream Sellout tour, MGK told the audience that the venue planned to fine him “$70,000 for every 10 minutes” his show ran over its scheduled time.
He then downed a glass of wine before stating, “You know what I say to that? We aren’t stopping this concert for shit. I’m rich, bitch” and smashed the glass against his forehead – a moment which was captured by an audience member.

Shortly before the unhinged glass incident, Kelly zip lined across the length of the stadium in a stunt which Page Six reports was pulled off in less than 24 hours. A source told them, “The zip line was erected that day to take him from the top of the Browns’ stadium across 50,000 fans to the opposite side of the field.”
You can watch the stunt below:

MGK often finds himself caught up in controversy, an ongoing feud with Slipknot’s Corey Taylor saw him repeatedly make headlines.
His tour bus was also recently subjected to a vandalism attempt where a homophobic slur was written across one of the buses, which he claimed in an Instagram post was the wrong bus. The graffiti was washed away.
Machine Gun Kelly’s documentary Life In Pink is available to stream now on Disney+ should you want to know more about the artist.

The post Machine Gun Kelly doesn’t flinch at venue’s $70,000 overtime fees – or when smashing glass with his face (again) appeared first on Guitar.com | All Things Guitar.