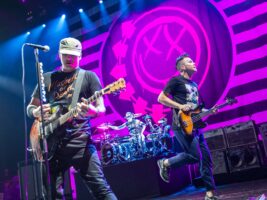 Rumours of Tom DeLonge’s return to Blink-182 were reignited as bassist Mark Hoppus discussed the band’s future and how he reconciled with DeLonge.

In a new interview with People, Hoppus described how DeLonge and drummer Travis Barker had visited him at home while the bassist was recovering from chemotherapy.
“It was the first time that all three of us were in the same room in like five years. It’s actually better than it used to be. There was no agenda. There were no lingering grudges. It felt very back to what it should be: three friends sitting in a room,” Hoppus shared.
“Everybody’s in a really great place right now,” he said of the repaired friendship.
Hoppus played his cards close to his chest about the rumours of DeLonge’s return, however, simply stating – “I keep writing music, and I’m open to whatever the next phase of Blink is. I’m hopeful for the future. I’m just damn glad to be here.”
Rumours that DeLonge would reunite with Blink-182 began last month when guitarist Matt Skiba told replied to a fan last month telling them he doesn’t know what the current status of the band is, and the whispers only got louder when DeLonge has changed his bio on Instagram to state that “I make music”, tagging both Blink-182 and Angels & Airwaves official accounts.
Hoppus previously shared that he is now “cancer free” after completing chemotherapy back in October last year.
The post Mark Hoppus says the future of Blink-182 is “open” after patching up with Tom DeLonge appeared first on Guitar.com | All Things Guitar.