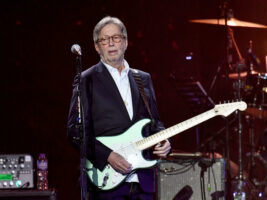 Eric Clapton has shared a previously unreleased cover of Albert King’s Born Under a Bad Sign from his upcoming remastered vinyl box set.

READ MORE: Ted Nugent reflects on his admiration for Eddie Van Halen: “I was fascinated to see what this guy was doing with a handmade guitar, back in ’77”

The Complete Reprise Studio Albums Vol. 1 box set will feature remastered versions of Money and Cigarettes as a single LP, and Behind the Sun, August, Journeyman, From the Cradle, and Pilgrim as double LPs.
The 12-disk collection also includes a disk with rarities from Clapton’s 80s and 90s period, including the cover of Born Under A Bad Sign.
Clapton co-producer Simon Climie oversaw the the box set’s production, with remastering by Bob Ludwig at Gateway Studios in Maine, and vinyl mastering by Chris Bellman at Bernie Grundman Mastering in Los Angeles.
Complete Reprise Studio Albums Vol. 1 set is set to be released on 30 September, and can be pre-ordered now at $249.98

First recorded by blues singer and guitarist Albert King in 1967, Born Under a Bad Sign has been inducted into the Blues Foundation Hall Of Fame and was acknowledged in the Rock and Roll Hall of Fame’s list of the 500 Songs That Shaped Rock and Roll.
This is technically not the first time Clapton has covered King’s blues classic, however, as Cream included the track in their 1968 album Wheels Of Fire with an extended guitar solo from Clapton.
Cream also taped several live versions of the track: first in October 1967 for the BBC which was released in 2003 under BBC Sessions, and again at the Royal Albert Hall in London as part of their 2005 reunion shows.
In other Clapton-related news, Ozzy Osbourne recently shared a story of how he believed the blues legend had been stalking him for years due to Osbourne’s substance abuse making him “paranoid as fuck”.
The post Eric Clapton shares unreleased cover of Albert King’s Born Under a Bad Sign appeared first on Guitar.com | All Things Guitar.