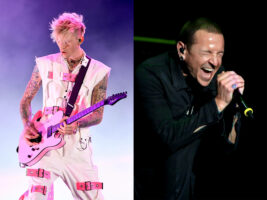 Bennington was the lead vocalist for nu-metal band Linkin Park, he passed away in 2017 after taking his own life. His death shook the music industry and he is still dearly missed by his friends, family and fans.
At his OVO Arena Wembley show in London, MGK looked back on Bennington’s passing noting, “We had a tour that we were about to start and three days before we started that tour, Chester passed away. The last time I saw him was here in Europe, so I encourage you, because life is short, to go live this life.”
He went on to add, “I know it’s hard, man. I know this shit is fucking hard. But nights like tonight make life worth it.” Kelly then played the song Glass House from his 2019 album Hotel Diablo. It reflects on the passing of other artists including Mac Miller and Lil’ Peep, while also addressing Bennington’s death.
Its lyrics state, “Last time I got off the stage, I looked Chester in the face / But now he gone, and ain’t no going back.” You can watch MGK’s words on Bennington in the clip below:

Kelly’s documentary, Life In Pink, on Disney+ addresses the ups and downs the controversial pop-punk star has faced during his time in the limelight. In the trailer, Kelly speaks of his own struggles stating, “I feel like the world hates me”, but he notes “I never gave up”. You can watch the trailer here:

MGK is currently on his Mainstream Sellout tour, there are still a few dates remaining in Europe, you can get tickets at machinegunkelly.com
The post Machine Gun Kelly pays tribute to Linkin Park’s Chester Bennington at London concert appeared first on Guitar.com | All Things Guitar.