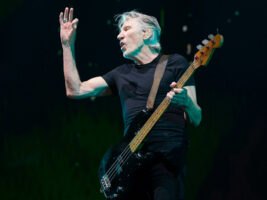 Pink Floyd co-founder Roger Waters believes that he’s “on a kill list that is supported by the Ukrainian government” according to a new interview.

Not one to shy away from politics, the rocker was speaking to the Rolling Stone when he made the claim that the United States is “the most evil of all by a factor of at least 10 times.”
“We kill more people. We interfere in more people’s elections. We, the American empire, is doing all this shit.”
When asked about the multiple reports detailing Russia’s war crimes, Waters replied, “You’ve seen [those reports] on what I’ve just described to you as Western propaganda. It’s exactly the obverse of saying Russian propaganda; Russians interfered with our election; Russians did that. It’s all lies, lies, lies, lies.”
He then said that he’s “on a kill list that is supported by the Ukrainian government” after the interviewer — investigative journalist James Ball — pointed out that he had spoken to people in Ukraine as well as journalists who are covering the war on the ground.
“I’m on the fucking list, and they’ve killed people recently.… But when they kill you, they write ‘liquidated’ across your picture. Well, I’m one of those fucking pictures,” said Waters.
According to the Rolling Stone, the list Waters references is maintained by a far-right Ukrainian organisation. While it claims to be a source of “information for law enforcement authorities and special services” instead of a kill list, the site has been met with international condemnation.
“And when I read stuff, which I have done in blogs and things, criticising me… I always go and look and see where it came from. And it’s amazing how often when I’ve done the hunt and hunted it down, it is ‘da-da-da’ .ukraine.org,” he says, making up a hypothetical Ukrainian website.
Waters also claims that “it’s an unnecessary war,” and that “those people should not be dying. And Russia should not have been encouraged to invade the Ukraine [sic].”
Last month, the musician wrote an open letter to Ukranian First Lady Olena Zelenska, during which he criticised the West for supplying weapons to Ukraine, and requested for Zelenska to persuade her husband to “stop the slaughter”.
He then penned a second letter to Vladimir Putin, urging the Russian President to put an end to the war in Ukraine, following a reply from Zelenska herself asking Waters to direct his requests for peace to the Russian Federation instead.
“When Mrs. Zelenska replied to me via Twitter, I was very surprised and mightily moved. If you were to reply to me, I would mightily respect you for it, and take it as an honourable move in the right direction towards a sustainable peace,” he wrote.
The post Roger Waters claims he’s on a Ukrainian “kill list”, calls Russia’s reported war crimes “Western propaganda” appeared first on Guitar.com | All Things Guitar.