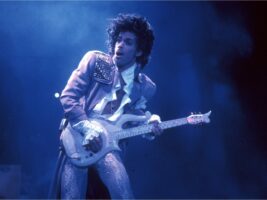 The maker of Prince‘s Cloud Guitar will be able to continue making and selling replicas after a long legal battle with the artist’s estate resulted in an agreement.

Dave Rusan, who built the guitar for Prince’s 1984 movie ‘Purple Rain’, told KSTP-TV that the four-year legal battle, which began when the Paisley Park Estate sent a letter to the guitar maker in 2018 ordering him to give up his trademark on the design and cease making Cloud Guitar replicas, ended with the two parties reaching an agreement that will allow Rusan to continue making and selling replicas.
Rusan told the outlet that while the agreement was confidential, it was an amicable one between the two parties. “It doesn’t feel good to have somebody try to tell you what you can and can’t do,” he said, adding that he was glad he and the estate were able to ” come together and both move on.”
The Paisley Park Estate did not return the outlet’s request for comment.
Prince and The Revolution: Live was recently released on 6 June as a 3-LP vinyl, 2-CD/Blu-Ray or via streaming in Dolby Atmos, and features Prince’s exhilarating 1985 Syracuse show remastered in all its glory. In a nine-and-a-half star review, Guitar.com called the live album “undeniably the most complete document of the impact that Prince and his Revolution compatriots: Wendy, Lisa, BrownMark, Bobby Z and Dr Fink, could have on a crowd.”
In other recent Prince news, unearthed unseen archival footage of an 11-year-old Prince voicing his support for public school teachers on strike was unearthed by journalists in Minneapolis. Upon combing through old archival footage, Matt Liddy, the production manager for WCCO ran across a familiar face and the reporters at the station reached out to an old schoolmate and childhood friend of Prince’s, Terrance Jackson, who also performed with Prince in his first band, Grand Central, to confirm it was indeed Prince.
“That is Prince! Standing right there with the hat on, right? That’s Skipper [Prince’s childhood nickname]! Oh my God!”, Jackson told the reporters, adding that the late artist was already playing guitar and keys then.
The post Maker of Prince’s Cloud Guitar can continue making replicas after legal battle with estate results in agreement appeared first on Guitar.com | All Things Guitar.