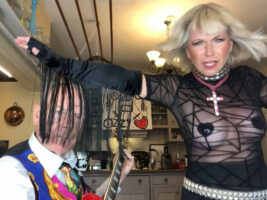 Robert Fripp of King Crimson and wife Toyah Wilcox have released a cover of Ozzy Osbourne’s Crazy Train for this week’s Sunday Lunch.

READ MORE: Watch: Mick Jagger flashes back at topless woman in the crowd

The couple have elected to pay homage to the Prince of Darkness with Toyah’s wardrobe for this edition, which includes a sheer black top, a large cross necklace and fringe sleeves. At one point Fripp unwittingly joins the homage with Toyah using her fringe to give Fripp an imitation of Osbourne’s famous hairdo, despite Fripp’s best efforts to keep the raiment out of his face.
The message on the couple’s cabinet, as is custom, has been changed to the simple proclamation, “We Love Ozzy!”
Watch Robert Fripp and Toyah cover Crazy Train below.

This isn’t the first time Fripp and Toyah have paid tribute to Osbourne, having previously covered Paranoid in June last year. Beginning in 2020 at the height of the pandemic lockdowns, Fripp and Toyah’s Sunday Lunch series has heard them take on a number of rock classics, including Foo Fighter’s All My Life, Neil Young’s Rockin’ in the Free World, Smashing Pumpkins’ Bullet with Butterfly Wings and Billy Idol’s White Wedding.
Toyah also released her new single, a cover of Grace Jones’ classic Slave To The Rhythm, on August 1. The artist has an intimate connection with the Darlow, Trevor Horn, Bruce Woolley and Stephen Lipson-written track, having originally sung on the demo that was rejected by Frankie Goes To Hollywood before it was picked up by Jones.
“It sounds amazing, totally different to Grace Jones’ iconic and perfect original,” said Toyah of the track.
“My version will surprise all, it has a connection to the words that suddenly revealed itself as soon as I put the main vocal down and Fripp played. The three of us really are a great musical team, we are very excited.”
The post Robert Fripp and Toyah board the Crazy Train with Ozzy Osbourne cover on this week’s Sunday Lunch appeared first on Guitar.com | All Things Guitar.