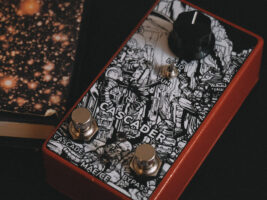 Mask Audio Electronics and Collector//Emitter have teamed up for their second collaborative pedal, the Cascader fuzz.

READ MORE: Fuzz Was The Future: Distortion was destiny

The pedal follows Part Garden, a fuzz pedal the two released in late 2019. It’s a revisiting of the early stages of that pedal’s design, and as its name implies, is based around cascading one fuzz into another.
When engaged with the bypass switch, the pedal by default creates its main fuzz voice by combining a distortion-like tone and a more velcro-like, gated fuzz. The cascade footswitch then engages another fuzz at the beginning of the circuit to overload the later stages. This gives a more saturated, gainy sound.
Controls on the face of the pedal are relatively simple. The Loud control manages the pedal’s output volume, while the Yuh toggle switch adjusts the amount of compression. In the left position, it will be more open, with thick sustain. In the right position it gives a far more gated sound.
Mask Audio Electronics and Collector//Emitter discuss the development of the pedal in the Introducing video below.

If you just want to hear the pedal in action, check out Collector//Emitter’s demo below.