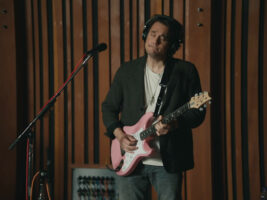 READ MORE: John Mayer says he almost quit music after he was told Continuum had “no hits”

The track was recorded live at LA’s Henson Studios, and was filmed for a slick performance video. On the song, Mayer is joined by musicians Lenny Castro, Greg Phillinganes, Sean Hurley, David Ryan Harris and Aaron Sterling. It was mixed by Don Was.
Sob Rock was a nostalgic tribute to the soft-rock of the 1980s that shaped his childhood. In a 7/10 review, Guitar.com called it a “record wrapped in knowing irony, but Mayer’s love for this oft-derided era of guitar music shines through, while giving him a chance to pay tribute to some of his less obvious influences.”
The launch of the album also saw Mayer get a new Roxy Pink version of his Strat-style PRS signature, the Silver Sky, which he plays in the live video for Last Train Home (Ballad Version). Musically, the new version unsurprisingly ups the emotional breadth of the Last Train Home, with a slower tempo and an even more romantic spattering of guitar solos.
Take a listen below.

The post John Mayer puts a new spin on Last Train Home with a video for the “ballad version” of the track appeared first on Guitar.com | All Things Guitar.