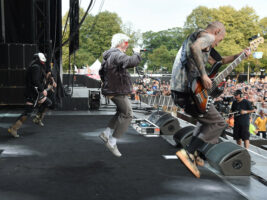 Limp Bizkit Still Sucks (is the name of their new album)

Limp Bizkit have announced that their new album, Still Sucks, will arrive on Halloween – just two days from now.

READ MORE: Wes Borland on Marilyn Manson abuse allegations: “Every single thing that people have said about him is true”

The nu-metal stalwarts released a comeback single, Dad Vibes, last month, after previewing it (and Fred Durst’s excellent new look) over the summer at some live appearances. The track was their first new material since 2014’s single Endless Slaughter, and the new album Still Sucks will be their first since 2011’s Gold Cobra.
Endless Slaughter was intended to precede the release of a new record, Stampede Of The Disco Elephants, however this has been delayed extensively. It’s tentatively set to also be released this year, following Still Sucks, label issues permitting.

Guitarist Wes Borland said of the new record: “Our first album in over a decade comes out this Sunday! Happy Halloween!”
Still Sucks’ tracklist is below:

Out Of Style
Dirty Rotten Bizkit
Dad Vibes
Turn It Up, Bitch
Don’t Change
You Bring Out The Worst In Me
Love The Hate
Barnacle
Empty Hole
Pill Popper
Snacky Poo
Goodbye

The post Limp Bizkit Still Sucks (is the name of their new album) appeared first on Guitar.com | All Things Guitar.