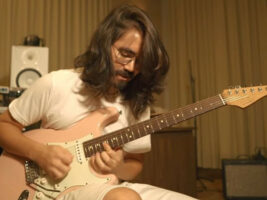 Mateus Asato has shared his first performance clip on Instagram after deactivating his account from the platform over a year ago. And as demonstrated in his jam over Ariana Grande’s Bad Decisions, the guitar virtuoso’s playing is as sharp as ever.

Uploaded to Instagram on Monday (25 April), the clip has garnered over 100,000 likes so far on the social media platform, on which Asato first shot to guitar stardom.
“Ariana Grande makes the best instrumental tracks for guitar players. I am sorry, Ariana,” Asato coyly captioned his post.
Just some of the techniques demonstrated by the virtuoso in his brief cover were elegant double-stops, impressive scale climbs, outside playing aplenty and speedy whammy purrs handled on his shell pink Suhr signature model.
Listen below:

The clip marks the first new guitar playing content we’ve seen on Instagram since Asato announced he was taking a break in February 2021; he only reactivated his account in the beginning of April.
“Hi there! It’s nice to see you again,” he wrote in the post announcing his return (translated from Portuguese with Google Translate). “And here we are again! After being absent from virtual space, I’ve chosen to return to this ‘place’ that provided me with so many things.”
“I want to say a big thank you to everyone who showed affection and care in these 14 months of a much needed hiatus,” he continued. “My wish now is that we continue on this journey that has meant so much to me. How nice to see you all again!”

While the clip is Asato’s first on Instagram in a while, he hasn’t been entirely off social media this whole time; over the year, he’s been occasionally sharing videos of his playing to TikTok.
The post Mateus Asato returns to Instagram with thrilling cover of Ariana Grande’s Bad Decisions appeared first on Guitar.com | All Things Guitar.