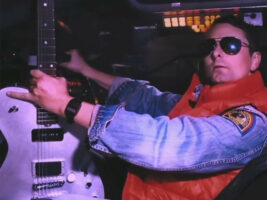 Muse frontman Matt Bellamy has appeared in a new trailer for a Manson Guitar Works instrument, hopping into a DeLorean and blasting off back to the future.

In the slick trailer, we can see what’s presumably a new signature electric for Bellamy. Lying on the hood of the time-travel-capable car is a new version of the Manson MA series, finished in silver sparkle and featuring a humbucker in the bridge position, and a P90 in the neck.
The date Bellamy punches into his retro time machine? 26 October, so just over a week away. Seems overkill to use a time machine to get to next Tuesday, however that’s presumably when full specifications of the instrument will be revealed.
Take a look at the trailer below.

The introduction will follow that of the KR-1, a new signature model for Bellamy unveiled in June. It features a Sustainiac Sustainer neck pickup, an ebony fingerboard and all-black hardware for a stealthed-out look. It was also a limited run, with only 80 pieces worldwide. The same might be true for the above as-yet-unnamed signature.
The post Matt Bellamy hits 88 mph in new Manson Guitar Works teaser-trailer appeared first on Guitar.com | All Things Guitar.