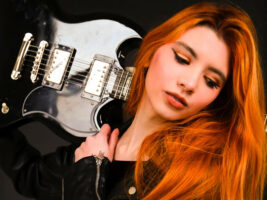 At just 20 years of age, Cait Devin’s already climbing her way up the industry ladder. Although a passionate singer-songwriter in her own right, the shred collaborations she hosts via YouTube haven’t just been fundraisers for charity, but impressive mini-concerts where she’s been joined by some of social media’s most notable players and musicians, from Michael Angelo Batio to Lexi Rose, and plenty more besides.

READ MORE: “I write guitar parts that are always in service to a dynamic vocal melody”: Tasha on her new album, avoiding genres and the influence…

We talk to her about using music to ease health issues, her latest shred collab, Jams For Benefits, and her recent single, Jokes On U.
How long have you been playing guitar?
“I picked up my first acoustic guitar at 14-years-old and started doing acoustic gigs regularly at 15. Around 17 I started playing lead guitar and formed a hard rock band, and that was where I got lots of experience. After that I decided to reach out to my favourite players, in the hopes I would work with them. But lead has always been my second voice.”

Since then, you’ve hosted a lot of shred collaborations for charity. Why didn’t you pursue a more linear solo career?
“Going through a condition like trigeminal neuralgia, it’s really opened my eyes to what others can truly be struggling with health wise. So, it really inspired me to do charitable work so that my projects could also benefit those in need. I have a main solo career alongside my guitar work — I’m a singer-songwriter and have been since the very beginning of my journey. I’d consider the shred collabs and things to be more of a side project but a very, very worthy one I’m proud of.”
What can you tell us about your upcoming collaborations and projects?
“I’ve organized three mega shred collabs and a couple others including Vinnie Moore and Andy James. This next event will be called Jams for Benefits and it’ll be a concert series over the course of several weeks. I’ve teamed up with a newer streaming platform for performers called the Avenue, artists such as Rikki Lee and Sarah Longfield have already done their own streams on there. It’s a great place to build an audience.
“The event will open with a series of independent and underground artists and headliners include Bill Hudson of Trans-Siberian Orchestra, Michael Angelo Batio, Lexi Rose with so many more. Each stream will have a tip jar attached and proceeds will go to the Facial Pain Association — a link will be shareable for viewers to tune in — and they basically provide resources for patients like myself struggling with trigeminal neuralgia. If you don’t know what that is, it’s a severe chronic nerve pain condition which affects the trigeminal nerve carrying sensation from the face to the brain. More details and full line up will be announced later this October.”

What do you learn from collaborating with established guitarists? Do you ever feel the pressure of being a woman who’s up and coming?
“I honestly don’t feel pressure. I’m just happy to be here! I take tabs for a few solos by different people, and I just go over exactly what they’re playing, so I definitely pick up on a few guitar licks. The more melodies in my brain, the better!”
Who influences your sound as a guitar player?
“I’ve explored many genres. My recent single, Jokes on U, has a very alternative pop feel with elements of hip hop and rock, I think that’s where I’m headed. I feel like I’ve found a sound I can express myself freely in and be the most authentic. I was in the rock realm for a long time — and still consider myself to be given I’m hosting all these projects based around the genre — but I’m open to artists of all kinds and trying to think outside of the box. I love songwriters like Ed Sheeran and Taylor Swift but I’m also a massive fan of Doja Cat, The Weeknd, and Grimes. As far as my playing goes, I have so many people I look up to who’ve influenced me, some I can now call my friends, including Sophie Burrell, Nita Strauss, Angel Vivaldi and so many more!”

Do you see future projects following a similar theme or going in a different direction?
“Definitely alternative pop is where my heart is — often accompanied by some guitar riffs. I’m a lover of all styles and, because of who I am as an artist, I try my best not to label. But I’m definitely happy with where I’m at.”
What are your goals as a guitarist and songwriter?
“I want to keep raising funds for good causes — doing music just for myself, alone, sort of feels all in vain. It’s a goal of mine for the future to eventually get signed and join a great team. And it’s not to say I can’t be an independent artist forever — it’s certainly more than doable and fun — but to be a part of that ‘family’ vibe would be cool. Of course, I need to tackle my condition a bit more, but I have faith I’ll get better and take on life!”
Cait Devin’s new single, Jokes On U, is out now. Visit caitdevin.com for more information on her Jams For Benefits.
The post Meet Cait Devin: The guitar community’s most charitable new player appeared first on Guitar.com | All Things Guitar.