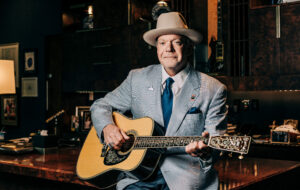 The greatest guitar collection on Earth

Over the years, some remarkable guitar collections have featured in the pages of this magazine. But, in terms of owning historic instruments with rock ’n’ roll credentials and sheer spending power, nobody can top Jim Irsay. For the last quarter of a century, the billionaire owner and CEO of the NFL’s Indianapolis Colts has spent big to obtain some of the most iconic instruments in rock history. Gilmour’s Black Strat? A cool $3.9m. Jerry Garcia’s Tiger? $957,500. The Stratocaster that Bob Dylan played at Newport Folk Festival in 1965? $965,000. The Gibson SG that George Harrison used on Revolver? $567,000. The list goes on and on.

READ MORE: The Best Guitar Albums Of The Year 2021

Yet rather than accumulating expensive toys in some crass display of wealth, talking with Irsay reveals that he has a deep love and appreciation, not only for the timeless music these instruments were used to create but also what they represent as cultural – and indeed countercultural – objects. It’s not just guitars, either. Irsay’s collection also includes Jack Kerouac’s original 36-metre typewritten manuscript for On The Road ($2.4m), Hunter S Thompson’s Red Shark convertible, Abraham Lincoln’s walking cane and an original Apple II manual signed by Steve Jobs in 1980. Perhaps as a nod to Irsay’s own well-publicised battle with addiction, there’s also the working manuscript for The Big Book aka Alcoholics Anonymous. Bought at auction in 2018 for another $2.4m, Irsay acknowledges that the text and its famous 12-step program “has literally saved millions of lives”.
We haven’t seen many 1959 Les Pauls with more dramatic flametops than this
Most of these artefacts currently reside either at Irsay’s home or in his office at the NFL team’s headquarters and practice facility. In the interests of making the collection more accessible to the public, a series of pop-up exhibits and concerts in the USA and Europe are set to be the precursor to the opening of a museum akin to Seattle’s MoPOP, which was founded by Microsoft’s Paul Allen. A personal friend of Irsay’s, Allen passed away in 2018 but could regularly be found bidding on many of the same celebrity-owned instruments as the Irsay team, including Ringo Starr’s Beatles-era drums.

Although the museum’s permanent location hasn’t yet been finalised, for the 62-year-old Colts owner, it’s all about inspiring young people to pick up the baton. “History is so important,” he says. “So much of what we’re about as a world, as humanity, is tied to music. It’s been that way ever since the cavemen were around the fire and they scrawled on the walls, they beat things – there was always this feeling of self-expression. And a deeper feeling than just having words or sign language, or hunting and gathering systems. To me, it’s really important that the museum is alive. How you experience it when you walk in? I want it to be interactive.”
“I can’t be Pete Townshend or Chrissie Hynde or whoever because that’s just not me. But I can be a curator”
Irsay envisages a space where musical instruments coexist with the other objects in the collection to tell the story of American history and 20th century pop culture. Whether it’s David Gilmour’s Martin D-35 or the franchise his late father Robert purchased back in 1972, he is adamant that he sees himself more as a custodian than an owner. After all, millions of people have strong and intensely personal connections to their favourite musicians and sports teams.
When Bob Dylan went electric at Newport Folk Festival in 1965, it changed the course of pop history. This guitar was there
“When I first got the [On The Road] scroll, Rolling Stone said that I would destroy it!” Irsay says, laughing. “We did some fun things with it but we were always careful. We never put it in harm’s way. But I like people to be able to say, ‘I played Tiger’, if you are a guitar player of any magnitude, or even if you just want to hold it. I get letters all the time, ‘Please can I come on a pilgrimage, I just want to see Tiger, it means so much to me’. Our emotional and spiritual lives are so tied to the arts, so tied to music. If someone has a death in the family or a transformative time in their life, and a certain song came out at that time, they remember that moment. It’s way bigger than just saying, ‘Oh, that’s a nice song. That’s a cool groove’. It’s much more than that. I mean, it’s the fabric of people’s lives. It’s so important to me that in the museum, people can play things and touch them.

Before the time comes to stop the tape, we have to ask our host the question that invariably comes up when two Beatles obsessives engage in conversation. Given his great love for wordsmiths such as Dylan and Kerouac, Irsay’s answer is perhaps unsurprising. “In high school it was always, ‘Are you a Lennon or McCartney man?’ I mean, I love Paul, but there’s just no question. I was a Lennon man.”
Visit jimirsaycollection.com to find out more about the collection’s upcoming tour dates.
The post The greatest guitar collection on Earth appeared first on Guitar.com | All Things Guitar.