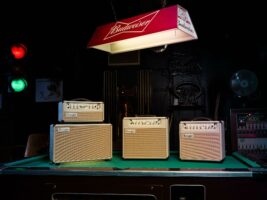 Designed to be extra portable and budget-friendly, the new line is essentially a more compact and manageable version of the single-channel California Tweed 4:40 6V6 that was released back in 2019. As its name suggests, the amps feature the same tweed-based design and are powered by two 6V6 power tubes, in addition to five 12AX7 and one 12AT7 preamp tubes.
Each amp is also rated at 20 watts but can be driven at three power levels (20 watts, 10 watts, and 1 watt) thanks to Mesa/Boogie’s patented Incremental Multi-Watt Power Amp with Duo-Class and Dyna-Watt technologies.
Users can choose between three power levels, two operating-classes, and three wiring options – all of which are accessible via a single three-way rotary switch. Here are the options:

Image: Mesa/Boogie
A quick glance at the front panel of the California Tweed 2:20 reveals single-channel simplicity. There are Normal and Low inputs, as well as controls gain, treble, midrange, bass, presence, reverb, and master volume.
The included reverb is a spring reverb, complete with an external reverb switching jack in each unit. The reverb footswitch and cable, however, are sold separately. And round the back, the amps feature a fully buffered, tube-driven series FX loop.
All three configurations of the California Tweed 6V6 2:20 also come loaded with Jensen Blackbird 40 Alnico speakers. Fans of vintage tones can order the amps at Mesa/Boogie’s website. The 1×12 combo will cost you $2099 while the 1×10 combo and the head will set you back $1999 and $1849 respectively.
Check out the new amps in action below: