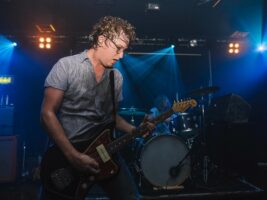 Canadian noise rock trio METZ have reported that a trailer full of their equipment and merchandise has been stolen in Santa Clarita, California.
The theft was alleged to have taken place on 21 November, day three of the band’s North American tour. The band are scheduled to play their way through to Toronto, Canada on 18 December and are determined not to strike off any shows on their tour.
“We’re determined not to cancel any shows and are en route to San Francisco now, but to continue on tour as planned we have to purchase an entire new set of backline, a massive expense on top of the loss we’ve already incurred,” wrote the band in an Instagram post on Sunday (21 November).
Oblique, the band’s management company, has established a GoFundMe page to help the band recoup their losses. If you wish to make a donation you can do so here.
Further, the band added that they’re struggling to replace some of the pedals in their rig and asked fans if they would be willing to help out. “If you’re in San Francisco (or a city we’re hitting in the next day or two) and can help, please DM us and we’ll get you into the show and be forever grateful,” they wrote.
The list of pedals needed as shared by the band, below:
Sans Amp Tech 21 Bass Driver DI
Electro Harmonix Big Muff
Boss NS-2
2x Boss TU-3
Boss DD-8
2x Voodoo Lab Pedal Power 2 Plus
Boss DD-5
Sans Amp Tech 21 NYC
Turbo Rat
Line 6 Delay Modeller
MXR Analog Chorus
El Nano Freeze
Akai Head Rush
Echo Day Dreamer
Death By Audio Interstellar Overdrive Deluxe
Roland SP404SX Linear Wave sampler
Keith McMillan Soft Step
Keith McMillan MIDI Expander

The post Metz report gear and merch stolen on tour, set up GoFundMe appeared first on Guitar.com | All Things Guitar.