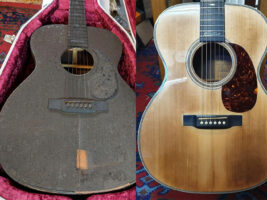 Monty’s Guitars restores a fire-damaged Martin for Ed Sheeran, given to him by Eric Clapton

Monty’s Guitars has shared the restoration of a Martin acoustic guitar belonging to Ed Sheeran, showing its transformation from a heavily charred mess to an almost-as-new instrument.

READ MORE: Jared James Nichols reveals plans to restore ‘Dorothy,’ a Les Paul found in the wake of a tornado

The guitar, given to Sheeran by Eric Clapton, was housed in the home studio of producer Joe Rubel when it was damaged in a fire. Monty’s Guitars noted on Instagram the guitar “was thought to be destroyed, the initial plan was to take the back off, which had been signed by Eric and use it to replace the back on a new EC model.”
“Once we had looked it over it became apparent that structurally the guitar was pretty much sound and the damage was largely cosmetic. Luckily the back with [Clapton’s] signature was really the only thing not resembling a charcoal briquette so we decided the best thing to do was strip it, spray it and rebuild it.”
See the results of the guitar below.

Monty’s Guitars also credits luthiers Kevin Williams and Tim Hughes for their “delicate woodwork” on the instrument.
The post Monty’s Guitars restores a fire-damaged Martin for Ed Sheeran, given to him by Eric Clapton appeared first on Guitar.com | All Things Guitar.