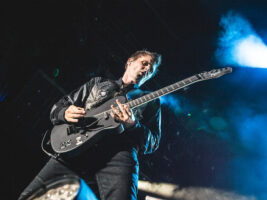 Rock band Muse have teased the imminent release of their latest single, Won’t Stand Down, revealing that it’s arriving this Thursday (13 January). As revealed by a recent preview of the track, the song is set to be one of the heaviest Muse have released across their career.

READ MORE: These are the most anticipated guitar albums of 2022

The band’s official social media has confirmed that Muse’s new song will drop later this week, and shared the dark artwork for the new single. Check it out below.

During a live stream over Christmas, frontman Matt Bellamy used the band’s Instagram account to stream a snippet of the new track. Check out the small section of the song, saved from an archive of the stream below.

The track will be Muse’s first release since their 2018 LP Simulation Theory, on which the band continued their exploration into electronic sounds with an overtly synthwave aesthetic. Won’t Stand Down, however, seems to signal a heel turn into more metal territory. The track’s artwork bears no neon colour highlights, only ominous hooded figures. And, despite the poor quality of the preview (the audio is taken directly from a phone recording of a car stereo playing the track at full blast), the heaviness has clearly been dialled up. Bellamy’s soaring vocals lead into a pummelling breakdown more reminiscent of the glitchy, metallic hardcore sounds of Code Orange than of even the heaviest Muse tracks.
Fans will have to wait until this Thursday for the full experience, so if you’re keen for a heavier Muse, mark that in your release calendar.
The post Muse will release a new single this week – and it might be their heaviest yet appeared first on Guitar.com | All Things Guitar.