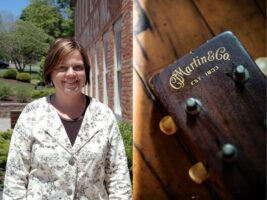 C.F. Martin & Co has issued a statement announcing the passing of Diane Martin, the wife of Executive Chairman Chris Martin IV.
Diane was said to have passed last Tuesday (4 January) after a lengthy battle with cancer.
“This is truly a great loss to the Martin family, the local community, and anyone who was lucky enough to know Diane,” said Thomas Ripsam, president and CEO of Martin Guitar in a statement. “At this time, our thoughts and prayers are with Chris and their daughter Claire.”
In addition to serving as vice-chair of Martin Guitar for many years, Diane was also a philanthropist who was chair of the Northampton Community College Foundation’s Board and Martin Guitar Charitable Foundation.
A statement from the company credited her as “instrumental in Martin Guitar’s success over the last three decades, fighting for diversity and sustainability, representing the company with numerous organisations, and developing close relationships with many of our customers and partners.”
It continues: “Anyone who knew Diane liked her for her quick wit, sense of humor, and compassion. And, while Diane will be greatly missed, we will continue to honour and celebrate her life. In lieu of flowers, the family has asked that you consider donating to the Martin Guitar Charitable Foundation to help carry on Diane’s legacy.”
Before joining Martin Guitar, Diane was a district judge from Lower Saucon Township and Hellertown. She met her husband Chris Martin IV after he appeared in her court for a traffic violation. The couple married on May 19, 1990.
The Guitar.com team offers our condolences to Martin’s family.
The post Diane Martin, chair of the Martin Guitar Charitable Foundation and wife of Chris Martin IV, has died appeared first on Guitar.com | All Things Guitar.