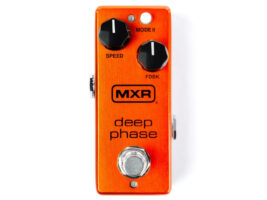 MXR has added to its phaser lineup with the new Deep Phase, a compact two-knob pedal voiced after classic two-mode phaser circuit.

The new pedal offers controls for both speed and feedback, with the former adjusting the rate of the LFO and the feedback control adjusting the intensity of the frequency peaks. The mode II switch allows you to increase the number of phasing stages from four to eight, doubling the number of frequency peaks and giving you a more intensely animated texture.
MXR also notes the effect’s suitability for bass, with a deep frequency response that doesn’t compromise clarity. The brand also states that, unlike its vintage inspiration, the pedal won’t introduce a volume drop when engaged.
While the particular pedal MXR is referring to isn’t mentioned by name, it’s likely the original Electro-Harmonix Small Stone, early incarnations of which did feature a volume drop.
Its enclosure is MXR’s smallest, perfect for those short on pedalboard real estate. It also bears a sleek, modern-looking brushed-metal orange finish.
The pedal is available with a street price of $129.99. Find out more at jimdunlop.com.
The post MXR launches the Deep Phase, a new compact two-knob phaser appeared first on Guitar.com | All Things Guitar.