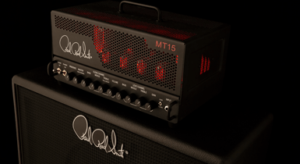 PRS has revealed the new Mark Tremonti MT 15 Amplifier and re-introduced SE Mark Tremonti Standard. Here’s PRS with the full details…
MT15 Amplifier
Lunchbox Hero“We knew we wanted a low-wattage amp. The challenge was getting a lot of tone and features in a little box. We’re all blown away with how it turned out. It’s going to be great for someone to take it out of the box, set everything to noon, and have it sound great.” – Mark Tremonti
The MT 15 is a commanding two channel amp with balanced aggression and articulation. Powered by 6L6 tubes, the MT 15 has a large, bold sound, so you can dig in heavy with rhythms but also get singing lead tones out of one amp. Whether recording, practicing, writing, or playing a small room, this amp has everything you need. The MT 15’s design started with heavier players in mind, but in the end, it has a lot to offer players of all genres.Cabinet sold separately.
Like the PRS Archon amplifier, the MT 15 features five gain stages before the Master for full, lush distortion. The gain channel gets big, chunky tone with massive, tight low end, never losing its articulate note definition or great lead tone. The clean channel is bright and chimey, good with chords and fingerstyle playing – whether with a pick or not. The clean channel also features a push/pull boost control that adds a little overdrive for old school crunch. No matter what tone you dial in, the MT 15 stays balanced across the spectrum with a sweet, smooth tone that won’t bite your head off.
Additional features include an effects loop and bias adjusters that are accessible from the back panel for ease of servicing. Despite its 15 watts, the MT 15 sounds more like 50, so a half power switch that takes the MT to 7 watts is a welcome edition. Bottom line, the amount of features, the hugeness of the sound, and the raw horsepower of the circuit make the MT 15 an impressive lunchbox hero. The MT 15 is Mark Tremonti’s first signature amplifier.
SE Mark Tremonti Standard
Ready to rock“I’m excited to re-introduce my signature SE Standard model, giving players all the features I demand with the most affordable guitar yet.” – Mark Tremonti
The PRS Mark Tremonti Standard has a powerful voice that is well suited to heavy rock rhythm playing and melodic, soaring leads. The Tremonti “S” pickups and dual volume and tone controls allow players to dial in a wide variety of tones, never losing this model’s signature articulate aggression.
Additional appointments include, an all-mahogany body, rosewood fretboard with PRS bird inlays, as well as a Wide Thin maple neck and trem-up route, making the SE Mark Tremonti Standard fast, fun, and hard to put down.
“With so many aspiring players struggling to stick with guitar past the first year, we knew we wanted to deliver an affordable, quality guitar that players didn’t have to fight. We want the guitar to inspire you to play; it can’t be something you have to worry about staying in tune or simply working right. So while the [SE] Standards are our most affordable guitars to date, that doesn’t mean we compromised on tone, versatility, playability, or reliability,” said Jack Higginbotham, COO, PRS Guitars. “We’re proud to offer these guitars to the world.”The post NAMM 2018: PRS Reveal Mark Tremonti MT 15 Amplifier & SE Mark Tremonti Standard appeared first on The Guitar Magazine.