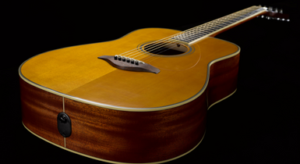 Yamaha’s TransAcoustic technology is now in the FG and FS series acoustics, bringing improved playability, tone and quality as well as an integrated actuator. Here’s the full story from Yamaha…ANAHEIM (January 25, 2018) —Yamaha today showcased the FG TransAcoustic—two groundbreaking guitars that combine the durability and affordability of the top-selling FG and FS series instruments with award-winning Yamaha TransAcoustic technology.
The FG-TA dreadnought and its concert-size counterpart, the FS-TA, are built on the innovative design of the company’s FG820 and FS820 models, which provide the best ever FG tone, playability and quality that has made it the choice of millions of guitarists worldwide.FS-TA
Enhanced playability and enjoyment are realized thanks to an integrated actuator, a small metal device completely hidden inside the guitar, that represents an entirely new concept in acoustic guitar technology. When the instrument’s strings are played, they cause the actuator to vibrate, which is then conveyed to the guitar body and the air around the guitar. This movement creates authentic reverb and chorus effects without needing any external amplification or effects.
TransAcoustic guitar technology, as it is known, was first introduced in 2016 in the premium Yamaha LL-TA and LS-TA TransAcoustic models, which earned “Best in Show” honors at the Summer NAMM show in Nashville, as well as a “Best of What’s New” distinction from Popular Science magazine.FG-TA
“The FG-TA and FS-TA bring our groundbreaking TransAcoustic technology to the masses, in a great sounding, extremely affordable guitar,” said Dennis Webster, product marketing manager, Yamaha Guitars. “The original TransAcoustic Guitar represented a quantum leap forward in guitar technology, encouraging musicians to play with more creativity, over longer periods of time. By introducing TransAcoustic technology into the body of our immensely popular, entry-level FG series guitar, we are able to get a much wider range of enthusiasts playing, many for the first time.”
FG series acoustic guitars are built to last, known for offering solid performance over many years. They are often cited as the first models played by many guitarists, including solo artist Liz Phair, Dave Navarro of Jane’s Addiction and James Black of Finger Eleven, but they are so well constructed that many guitarists keep them throughout their lives. Other famous pickers of Yamaha FGs have included Elliott Smith, Bob Seger and James Taylor.
Pricing and Availability:
The FG-TA and FS-TA (MSRP: $939.00) are available in Vintage Tint and Brown Sunburst finishes. In addition, the FG-TA is available in Black and the FS-TA in Ruby Red. Both models are now shipping.The post NAMM 2018: Yamaha Announces Affordable FG TransAcoustic Guitars appeared first on The Guitar Magazine.