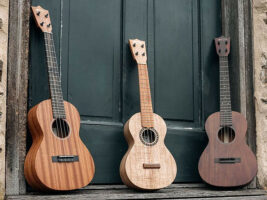 If you happen to be in Anaheim for the NAMM Show this weekend, you’ll be able to see all three models at the Martin booth (Hall D, booth 5602)
Martin 0 Tenor Uke
Martin 0 Tenor Uke. Image: Martin Guitar
With a body and neck crafted out of Martin’s “coveted stash” of sinker mahogany – river-excavated woods from 17th and 18th century Belize and one of the instrument maker’s most historically interesting tonewoods – this ukulele is said to offer a rich and complex tone, thanks to its high density.
It comes finished in satin and features an old-style script logo, along with a price tag of $1,599.
Martin C1 Uke
Martin C1 Uke. Image: Martin Guitar
A concert-size ukulele that sits between tenor and soprano body shapes, the C1 uke is described as a great beginner’s instrument thanks to its playability and balanced performance.
Its top, back and sides are crafted from koa fine veneer and each model has a hand-rubbed satin finish. Paired with a soft gig bag, the C1 lists for $449.
Martin T1 Uke FSC
Martin T1 Uke FSC. Image: Martin Guitar
Designed with both serious players and environmental health in mind, the T1 Uke FSC features “responsibly sourced” woods and a blue gig bag made of recycled plastic bottles pulled from the ocean.
Its construction matches a sapele body with an ebony fingerboard and bridge while a dovetail sipo neck brings extra stability. It also has Ratio tuners, which are said to let players tune quickly and accurately. Like the others, this model is finished in satin for a distinct shine. It lists at $459.
Learn more at martinguitar.com.
The post NAMM 2022: Martin adds three new ukulele models, one built with its “coveted stash” of sinker mahogany appeared first on Guitar.com | All Things Guitar.