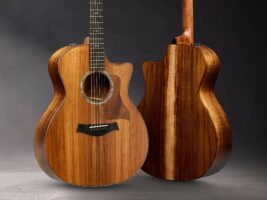 This time, the brand is shifting from its longtime tonewood pairing of rosewood and spruce to an all-koa construction.
The two acoustics are crafted with back, sides and top of solid koa, using new “select-grade” koa wood that boasts rich colour variegation and straight grain structure.
Compared to the brand’s existing highly-figured Koa Series, this all-koa 700 series offers a more “organic aesthetic”, says Taylor.
The guitars also come with an ultra-thin matte finish and a modified back bracing pattern, a combination that supposedly “minimises the damping effect” to produce a “punchier, more vibrant and player-reflective” sound according to Taylor’s master builder Andy Powers.
“With the ultra-thin finish, you can feel the actual wood texture, the grain structure, the pores,” Powers explains. You’ll also hear more of the tactile elements of your playing — more of your fingertips, a pick touching the strings, the subtle nuance of a guitarist’s natural sound. I think of this as a player-reflective version of a koa guitar — you get more control over what you sound like.”
As for the sonic differences between the new 700 Series and Taylor’s existing Koa Series, Powers says: “If a Koa Series guitar is a perfectly prepared cappuccino, these new all-koa 700s would be more like a great pour-over coffee with well-roasted beans, presented in the most direct way possible for the purest koa experience. You get all the flavour, with minimal filtering.”
Both the 724ce and the 722ce showcase a new suite of decorative appointments focused on natural materials, including rosewood binding, a paua shell/rosewood rosette, maple/rosewood top edge trim and a dark-stained maple pickguard. They also feature a new mother-of-pearl “Fountain” inlay motif.
The new koa 700s will replace the rosewood/spruce 700 Series models, except for the recently released Builder’s Edition 717, which retains its rosewood/spruce tonewood pairing and other specifications. The guitars will also ship with Taylor’s Deluxe Hardshell Case.
Pricing on the two guitars has yet to be announced.
Find out more at Taylorguitars.com
The post NAMM 2022: Taylor Guitars introduces two new all-koa acoustics to its 700 series lineup appeared first on Guitar.com | All Things Guitar.