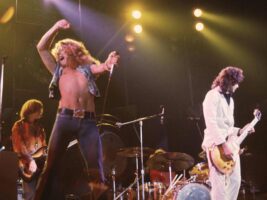 The feature length documentary, Becoming Led Zeppelin, which focuses on the origins of Led Zeppelin is still up for sale and its producers are currently hunting for a distributor.

READ MORE: Unreleased “Holy Grail” Led Zeppelin show from 1971 tour to be released as a bootleg

According to an industry document that was reviewed by LedZepNews, no announcement of the film’s release has been made despite the premier of Venice and Telluride film festivals in September, which has led to the news that while the film has been completed, the production company are awaiting a distributor to release it worldwide.
In the three years that the film has been announced, it has received significant criticism over its length, such as The Wrap in a review said, “if you’re a diehard fan, you’ll probably glory in what the film delivers and wish there were more of it; if you’re not, you may find yourself power-chorded into submission sometime before the 2-hour and 17-minute running time comes to an end”.
Becoming Led Zeppelin is included in the document titled UK Films For Sale produced by UK Film, the UK film industry umbrella group. The document was shared with film distributors at the Cannes Film Festival which took place on 17-28 May in Cannes, France
The document detailing the need for sale was created on  16 May by the production company, meaning that the producers were likely to use Cannes Festival to hunt for a film distributor.
This news comes after it was reported in February that a production company connected with the film faced being shut down in the UK because it was late filing its accounts. Let’s hope there is good news for the documentary soon.
The post Feature length documentary about Led Zeppelin’s origins currently seeking distributor appeared first on Guitar.com | All Things Guitar.