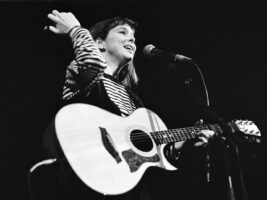 Nancy Griffith dies at the age of 68

Folk and country singer-songwriter Nancy Griffith has died at the age of 68.
Griffith was confirmed by her manager to have died today (13 August 2021), however no cause of death was given.
Griffith’s most popular songs include Boots Of Spanish Leather, Love At The Five And Dime, and Outbound Plane. Her career began when she was a teenager, performing in her local music scene in Austin, Texas and around the state.
She began her professional career in music in 1977, and released her debut album There’s A Light Beyond These Woods the following year, recorded at a live performance in Austin. Her second album, 1982’s Poet In My Window, was also released on a local label. She later signed with Philo, and received wider distribution of her next records Once In A Very Blue Moon and The Last Of The True Believers.
Griffith won a Grammy Award for Best Contemporary Folk Album in 1994 for her recording, Other Voices, Other Rooms.
While Griffith’s own material was successful, she found the biggest success when artists covered songs she wrote. For instance, Outbound Plane, which Griffith had written with Tom Russell for Little Love Affairs, became up as a Top 10 hit for Suzy Bogguss in 1991.
Bogguss paid tribute to Griffith on Instagram, writing: “My heart is aching. A beautiful soul that I love has left this earth,” Bogguss wrote on Instagram. “I feel blessed to have many memories of our times together along with most everything she ever recorded.”

Musician Darius Rucker also paid tribute, writing on Twitter: “Today I am just a sad man. I lost one of my idols. One of the reasons I am in Nashville. She blew my mind the first time I heard ‘Marie and Omie.’ And singing with her was my favourite thing to do.”

Today i am just sad man. I lost one of my idols. One of the reasons I am in Nashville.She blew my mind the first time I heard Marie and Omie. And singing with her was my favorite things to do. Grammy-winning folk singer-songwriter Nanci Griffith dies. https://t.co/LxybrFSHAh
— Darius Rucker (@dariusrucker) August 13, 2021

Griffith’s final album, Intersection, was released in 2012.
The post Nancy Griffith dies at the age of 68 appeared first on Guitar.com | All Things Guitar.